Home / Campus Life / Column: Universities should be the safe space that diversity needs 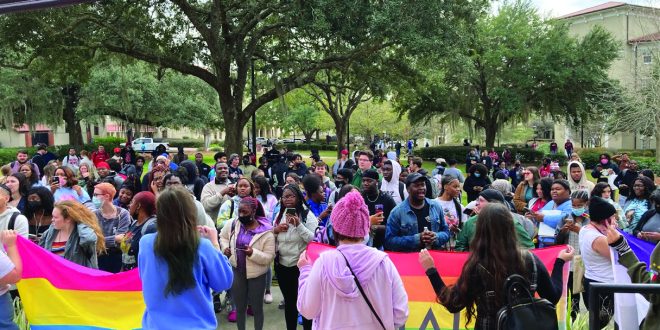 Anti-LGBTQ+ bills are being proposed through legislation that could cause harm towards the community, and if they are passed, universities should be a safe space and include diversity.

Nearly 240 bills were proposed in legislation that restricts the rights of the transgender community and the LGBTQ+ community.

One law that has been passed in Florida, known as the “Don’t Say Gay” bill, limits discussion on gender identity in classrooms.

The same bill has been proposed in Georgia.

According to Education Week, Critical Race Theory’s “core idea is that race is a social construct, and that racism is not merely the product of individual bias or prejudice, but also something embedded in legal systems and policies.”

Education is meant to help students prepare for the real world, and restricting or limiting these conversations could cause further harm for a child’s developing mind. This harm could potentially not be prepared for what’s to come, especially since they will encounter these discussions in the real world.

Not only does it cause harm in their development, but this could potentially cause harm and confusion for students who are questioning their gender or sexuality.

Limiting these discussions could also bring harm in the classrooms, a place that should be a safe place from a potential unaccepting household.

Yet, how do universities play a role in this?

Students from many backgrounds come to universities for higher education.

If the bill does get passed in Georgia, universities should create a safe space for all of these backgrounds where we can have open discussion about Critical Race Theory or sexuality and gender.

Students, no matter the background, will encounter both of these topics in the real world. Discussing it and being able to create a place that doesn’t allow discrimination will help minorities gain their voices to advocate what they believe is right.

Fostering a safe space in a world that wants to silence their voices crucial. The community should have every possibility to succeed as someone whose rights aren’t being threatened or taken from them.

Previous VSU hosts Research Symposium Week
Next Do you think VSU should rename buildings named after controversial people in history?