Home / Sports / Rugby / The Scrum for Glory: VSU’s rugby club sets their sights on the SCRC 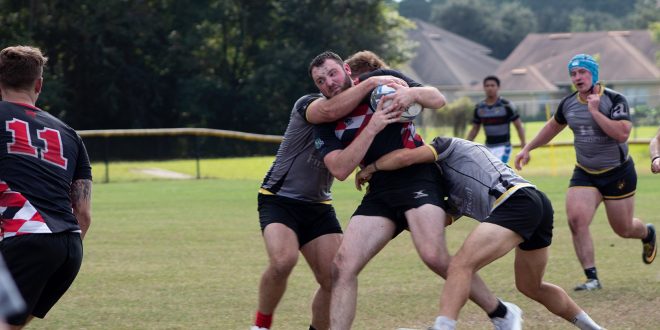 The Scrum for Glory: VSU’s rugby club sets their sights on the SCRC

The VSU rugby club entered a new chapter in the short but successful history of the team.

The rugby club has moved conferences, leaving the Georgia Rugby Union, which the Blazers have been members of since the club was founded in 2010, to the SEC’s rugby league, the Southeastern Collegiate Rugby Conference. Additionally, the club started a women’s team in the spring.

With the move to the SCRC, the Blazers will hope to have similar success to what they had in the Georgia Rugby Union, having won 11 division titles during their stint in the conference.  Further helping the Blazers’ cause will be second-year head coach Mike Nita, who was a three-time All American during his time at VSU.

The big changes have players more excited than ever to play as they get the opportunity to compete against tougher opponents.

“So they [the SCRC] have a Division I and a Division II bracket, and we made it into Division II,” senior 8-man, Tyler Pierce, said. “They’re going to make a Division III, but we’re not going to be in there. Now, we’re basically just facing SEC schools and top talent all the time.”

Though the Blazers wanted to face better competition, COVID also played a big role in their decision to leave the Georgia Rugby Union.

“COVID really screwed the small schools over, and there were like one or two teams,” Pierce said. “It just wasn’t fun for us to go out and play teams we’re going to demolish. Then, we’d get to nationals and we’d not perform well because we haven’t really played anyone good. No disrespect to those teams, though. It’s just that we’re head and shoulders above them.”

Meanwhile, the formation of the women’s team came after failed attempts in previous years, according to Pierce.

“Every year at The Happening, we’d get four or five girls who’d say, ‘Oh, I’d love to play,’” he said. “We tried in the past, but the school would either never really get behind it funding wise or it would be some other reason. One day, I said, ‘Let’s just try it. I’m sure there’s plenty of women around that would love to play.’”

The decision paid off. The Blazers were able to get a solid women’s team together thanks to hard recruiting.

“They’ve kind of made the team their own,” Pierce said. “They’re just improving by the day, and I’m really proud of them.”

Despite not getting scholarships unlike other schools in SCRC, the rugby teams just like to go out and have fun playing the game they love.

“We’re just a bunch of [people] running around, and we love it,” Pierce said. “To us, this is really fun. It’s kind of like a break and release for us that we get to say that we’re playing Division II rugby.”

The Blazers open their 15-man schedule on Sept. 3 against Georgia College at home on North Campus.