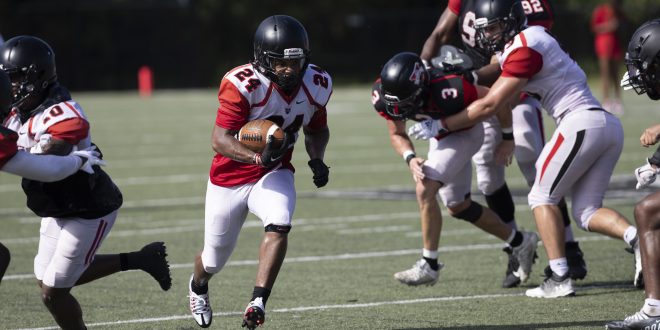 The No. 2 VSU football team is set to host the No. 7 Keiser Seahawks (1-0) of the National Association of Intercollegiate Athletics for their season opener for a rare Thursday night game in Bazemore-Hyder Stadium.

Though there has been a changing of the guard in head coach from last year’s Blazer squad, which went to the national championship, first-year head coach Tremaine Jackson knows that the mission remains the same.

Jackson is most excited to see his team perform against another team.

“I’m really excited for our players,” Jackson said. “They’ve worked extremely hard since the day we touched down here like they’ve always done. I’m eager to see them play against somebody else…that we don’t have to be in the locker room with so that we can compete and see who we are.”

Although they are members of the NAIA, an association separate from the NCAA, Keiser has had a string of success in their young football program. The Seahawks are coming into this game following a 44-7 win over Warner University, outgaining the Royals 532 yards to 123 yards with a balanced attack.

In their four seasons of competition, the Seahawks have won their conference, the Sun Division, championship three straight years. They have also advanced to the NAIA Playoffs the past three seasons, reaching the semifinals in 2020.

“They’re well coached,” Jackson said. “I coached in the NAIA, and there’s no slouches in the NAIA. So we understand that the level of football that they play is just like ours. We’ve got our challenges out in front of us, and we’ve got to match their intensity and be ready to go when they come here.”

For the Blazers, their offense will once again be led by preseason second-team D2Football all-American quarterback, Ivory Durham. The senior is coming off a strong 2021 campaign, passing for 3,425 yards and 32 touchdowns as well as rushing for 1,012 yards and 13 touchdowns.

Though both of Durham’s top two targets from last season, Brian Saunds and Lio-undre Gallimore (combined for 131 receptions for 2,323 yards and 22 scores), are gone, the Blazers do return senior wide receivers Victor Talley and Traven Roberts. Last season, Talley caught 32 passes for 433 yards and three touchdowns while Roberts caught 30 passes for 306 yards and two scores.

Also returning is senior running back Seth McGill, who rushed for 1,235 yards and 14 touchdowns last year. The Blazers also dipped into the transfer portal and brought in former Lowndes County star Travis Tisdale, who previously played at Kentucky. The sophomore is perhaps most remembered for his career-high 413 yards and six touchdowns in the 2018 Winnersville Classic.

The defense, however, is a different story.

“Defensively, we’re going to start 10 new guys that didn’t start in game one a year ago,” Jackson said.

Despite the new-look defense, Jackson believes the team has bonded together since his arrival to Titletown.

“Even though we had a lot of pieces come back, we still had new pieces that we added,” Jackson said. They’ve gelled from what it seems like. Seeing them come together with guys from around the country to add to guys who were already here [has] been a fun process.”

Additionally, Jackson stressed the importance of getting better against the run, which has been an Achilles heel for the Blazers in recent years, including in the Blazers’ 58-17 loss to Ferris State in the national championship last December.

Still, he thinks the defense has been resilient over the past few years as there has been turnover on the defensive staff for each of the past three years.

“From a defensive standpoint, we have to get better versus the run,” he said. “That ain’t no secret; everyone in Valdosta knows that. I think, to credit our defense, this is the first time that they will be playing in the same system from spring to the fall since 2019. Those guys played in three different systems in three different semesters and still made the national championship. So, our kids have been resilient. I think we can help them now as coaches and give them some consistency.”

The game against Keiser kicks off an 11-game stretch for the Blazers, who do not have a bye week during the regular season. However, the team is not running away from the challenge.

“We asked the seniors, ‘Do you want to have a bye week in week two or week three, or would you like to replace it with a game,’ and they asked for the game. So they know exactly what they’re getting into,” Jackson said.