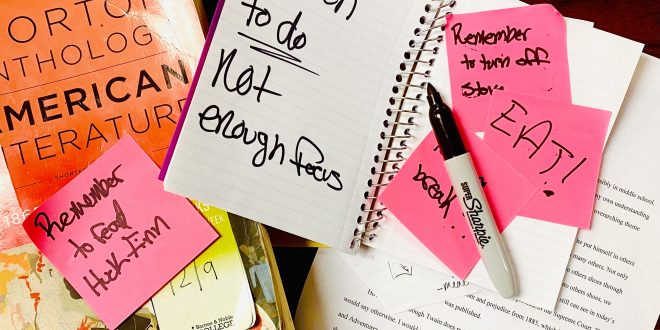 ADHD can affect student’s ability to learn in class

Lazy, disruptive, challenging. These are only some descriptive words that people labeled children with ADHD. However, ADHD is more than just a hyperactive disorder.

Before I was diagnosed with Attention Deficit Hyperactive Disorder, I was labeled as those words along with being hyperactive. As I got older, I noticed that my symptoms presented as being bored or having focusing problems.

This disorder never goes away, despite what people think. If left unmedicated or untreated, the disorder can become a nuisance and cause other mental health issues like severe anxiety, depression or mood disorders, according to CHADD.org.

College students with untreated ADHD, like myself, tend to have a much harder time in school than their neurotypical peers. Many factors play a role into this, but it’s important to understand why your friend or roommate is having trouble with a simple task that may take them 10 minutes.

Dopamine is a hormone that everyone has, which plays a role in our memory, movement and reward. An example of this is getting a piece of chocolate when a student gets a question right. That chocolate gives them a reward which then helps with their memory.

Someone with ADHD tends to have lower levels of dopamine. That piece of chocolate may not help that person with their memory. Of course, this is a very simple example that may not hold true. I know that I will more likely remember something if given some candy. Instead, it’s more like when I put down my phone, I will instantly forget about it, or I will hyper focus on TikTok and forget to eat.

Not only do people with ADHD hyper focus, but they also have this little thing called Executive Dysfunction. According to clevelandclinic.org, this phenomenon is a symptom that disrupt the brain’s ability to control thoughts, emotions and behavior. However, it may look like laziness. In reality, it’s more like they know that they have to do this task, but can’t be motivated.

Now, if you relate to Executive Dysfunction, don’t automatically think you have ADHD. This symptom can also show in addictions, depression, mood disorders and psychotic conditions. It can also show up in neurotypical people on occasion.

I highly encourage everyone to do more research on the disorder to better understand your friend or roommate or yourself. It could help you better succeed in college and help advocate for yourself if you believe you have ADHD.

Do not use the research to diagnose yourself since ADHD is a broad disorder that can look like other disorders.