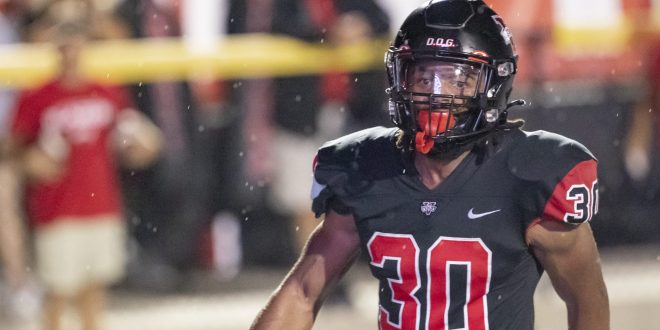 The Virginia Union Panthers (2-0) marched into Bazemore-Hyder Stadium and walked out with a stunning upset of No. 2 VSU (1-1), winning 45-40 on Family Weekend.

The game featured the return of many of the same mistakes that plagued the Blazers during their run to the national title game last season, particularly their run defense. The Blazers were gashed repeatedly on defense, giving up 305 rushing yards and five rushing touchdowns in the game.

Virginia Union running back Jada Byers was a big reason for that success for the Panthers. Byers averaged 9.8 yards per attempt on 29 carries, rushing for 283 yards and three touchdowns.

Head coach Tremaine Jackson was blunt on the team’s performance and execution against the running game.

“We missed fit the runs,” Jackson said. “We had the run fit, and we didn’t tackle very well. Very uncharacteristic of us. At the end of the day, we just didn’t play well against the run. I thought the game plan was still good. The execution wasn’t any good. Anytime you don’t execute, I mean, if there’s a guy there in the gap and he doesn’t make the play, is it the game plan, or is it the execution of what we’re doing?…Very disappointed as a defensive line guy. It’s heartbreaking for me. It’s heart-wrenching because that’s just not who we are.”

Additionally, Jackson believes this game has opened up the opportunity for other teams on their schedule to run the football on them.

“Now, what we’ve opened ourselves up to is for people to run the football,” Jackson said. “We’re going to have to answer that call every single week from here on out. They did nothing special. It’s what we didn’t do that really led to them having a good night.”

The Blazers and Panthers found themselves in a back-and-forth affair for much of the first half and into the third quarter.

The Panthers again answered as running back Curtis Allen ran for a 24-yard score to go up 14-13. VSU once again went tit for tat with Durham finding senior running back Jamar Thompkins for a 22-yard touchdown pass to make it 20-14.

Allen again found the end zone on Virginia Union’s next drive, this time finding pay dirt from ten yards out.

The errors started mounting for the Blazers as senior running back Seth McGill fumbled during the ensuing kickoff return. The Panthers wound up settling for a field goal to go up 24-20 heading into halftime.

The Blazers’ defense made a stand on the Panthers’ opening possession of the third quarter as sophomore defensive back La’Ken Nettles forced and recovered a fumble for the Blazers. The Blazers then marched down the field to score, with Durham tossing his third touchdown of the night, this time a three-yard pass to graduate wide receiver B.K. Smith.

The Blazers forced another fumble on the next drive but wound up turning it over themselves after being forced to punt, with a bad snap resulting in the punter having to fall on the ball.

From there, the Panthers seized momentum of the game. Byers gave the Panthers the lead with a 22-yard touchdown run.

Each of the Blazers’ next two drives ended in turnovers on downs as the Blazers rolled the dice and paid the price. And paid they did.

Byers ran for 52 and 50-yard touchdown scores to stretch the Panthers’ lead to 45-27 early in the fourth quarter.

Still, the Blazers fought back. Smith made a diving catch in the end zone for a 13-yard pass to make it 45-33. However, the Blazers failed on the two-point conversion.

The Blazers forced the Panthers to punt on their next drive, but were unsuccessful on offense, going for it on fourth down and coming up empty.

The offense did get another crack on offense, though, and were able to capitalize. Smith hauled in a 22-yard pass from Durham as he scored his third touchdown of the night.

However, the Blazers’ comeback bid was abruptly ended as they failed to recover the onside kick, sealing the upset.

Despite the loss, Durham had a solid outing. Durham went 34-56 for 314 yards and five touchdowns on the night.

Durham sees the loss as a humbling experience.

“This was the L that we needed,” Durham said. “I feel like it’s humbled us, and that’s a good thing. Sometimes you have to take an L and really show who you really are.”

Additionally, Jackson believes that the loss is the best thing that could have happened to the team to help them moving forward.

“This is probably the best thing that could have happened to us,” Jackson said. “Hopefully, we learn from it… It’s a wake-up call, and so our kids have got to handle it the right way.”

Ultimately though, Jackson held himself accountable for the team’s performance.

The Blazers will be on the road for their next three games. That road trip starts with a game against Miles College (0-2) in Fairfield, Alabama, on Sept. 17 at 7 p.m.