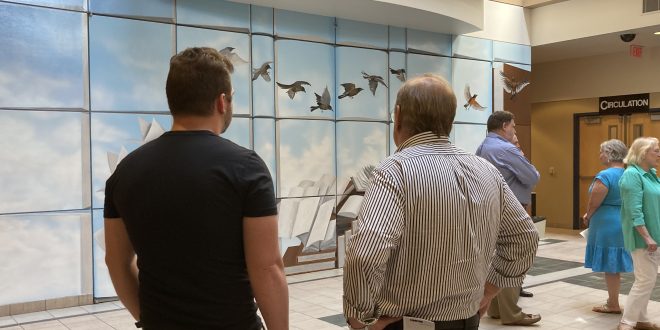 After years of wanting, Odum Library and VSU’s Archives and Special Collections teams have finally achieved an ultimate goal: a mural that represents knowledge, growth and success at VSU.

With combined funding from their separate foundations, the Odum Library Art Committee teamed up with the archives to host a nationwide art competition in search for the perfect mural. They sent out a list of broad themes, including knowledge, books and more, and received about 30 submissions from around the country, some of which came from VSU students.

After asking finalists from the competition to refine their original submissions, the art committee unanimously chose a piece by Tim Nijenhuis, a mural painter from Ontario, Canada.

Nijenhuis came to Valdosta for a week and a half in July to paint the mural, called “Metamorphosis.”

“Metamorphosis” depicts a pile of books transforming into a robin, a local bird species.

“The books look very real, but they are the idea of books,” Deborah Davis, director of VSU’s Special Archives and Collections, said. “We didn’t want words on the pages or anything. They slowly transform into birds… and fly out to face the viewer.”

Everything in the mural is a book.

It was painted on doors originally part of Odum Library’s fire suppression system, which Davis said were incredibly hard to cover during exhibits showcased by the archives.

“He really made use of the design of the doors and turned the sky into book covers,” Davis said.

Davis and her husband, Alan Bernstein, dean of the library, are both retiring at the end of 2023, and they believed the mural would be something they could leave behind after their departure from VSU.

Along with the mural, the archives showcase multiple collections and exhibits around Odum Library and campus. They have art, rare books, ancient tablets, photos and more for students to see. Including a museum on the fourth floor dedicated to the history of the school, there are three floors of art and eight galleries in Odum Library alone, all of which were donated.

Davis said one of the most rewarding parts of her job has been working with the art around the library.

“Metamorphosis” is located on the first floor of Odum Library at the south entrance. It is available for viewing during library hours, as are the other exhibits around the building.