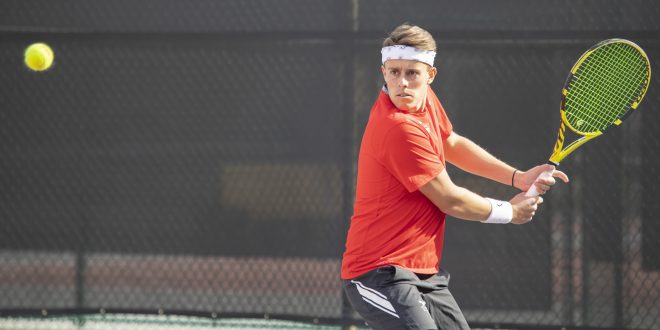 Junior men’s tennis star Luca Mack finds himself in a familiar position as he’s set to compete in the ITA Cup, taking place on Oct. 13-16 in Rome, Georgia.

It was only last year when he and fellow junior Rodrigo Carvalho advanced to the event in doubles before finishing as runners-up.

Now, Mack will be competing in singles as he aims to be the first Blazer to win the singles national championship since Philip Pakebusch won it all in 2009.

Mack secured his spot in the ITA Cup in dominating fashion in the ITA South Region Men’s Singles Championship, which was held in Montgomery, Alabama, on Sept. 23-26. Mack, who was a two-seed in the event, won all of his matches in straight sets.

Mack believes his experience from competing last year will go a long way towards helping him perform well this year.

“I had the experience to go to nationals already last year with my doubles partner Rodrigo, and of course it meant a lot,” Mack said. “It was a huge experience. It’s really nice to go for the second year in a row, and I will try to get the best out of it.”

Additionally, his past experience is helping him prepare for what will be fierce competition.

“Tennis [is] always a tough sport,” Mack said. “I think if you know, already, kind of what is coming, what do you have to [do] prepare yourself mentally? I think it’s already part to achieve a lot, and yeah, just try to now, of course, focus on myself.”

Tennis head coach John Hansen, who has coached many great tennis players in his time at VSU, believes Mack’s smarts and planning set him apart from other players.

“He might be the smartest,” Hansen said. “He has everything planned out…and just manages the match.”

Despite the ITA Cup being the premier national championship event for Division II, Mack is not feeling any pressure as he prepares for the event.

“I tried not to try too much to make me crazy,” Mack said. “I just tried to keep going with what I did.”

With Mack being the only player for either the men’s or women’s tennis team advancing to the ITA Cup, members of both teams have rallied behind Mack after he won the ITA South Region Men’s Singles Championship.

“They were all super supportive,” Mack said. “It means a lot to have that team on your back and, like, to support you [and to] know they are happy for you.”

While Mack has already had a decorated career as a Blazer, he believes winning the ITA Cup would be his biggest achievement, though he is also putting the team first.

“Among that with the conference championship and the finals last year with Rodrigo, of course, that would personally be my top [achievement],” Mack said. “But I mean, I’m here to play for a team, and it’s my first priority. I like to play for the team, and it’s why I’m here.”