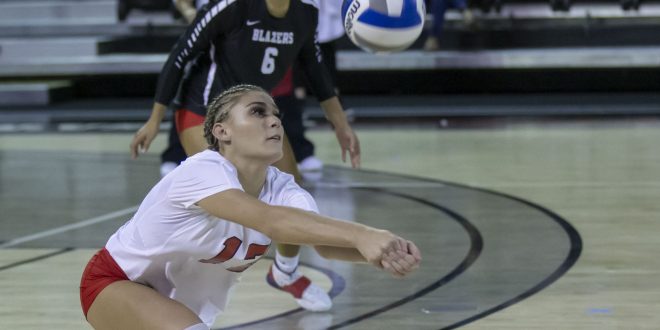 Facing the same team within five days is unconventional for most volleyball teams.

For the Lady Blazers, facing the Lee University Flames on Oct. 4 at home after a heartbreaking loss to them last Friday meant two things: a challenge and an opportunity.

Prior to the game, head coach Kaleigh Zoucha reflected on her team’s performance, obstacles and potential.

“There were some points that we left out there on Friday,” Zoucha said. “We just need to be able to control what we can control.”

A recent struggle to get kills on offense has proven to be one of the team’s biggest hurdles.

“We always do a pretty good job on defense,” Zoucha said. “I think that we had a hard time getting our offense going.”

The team’s 38 kills were not enough to pull out a win last Friday, especially since Lee scored 46 kills.

“It doesn’t matter what their record is; we have to play the way we know how to play,” Marshall said. “Playing this team is just like playing the number one team in our conference.”

Sophomore middle blocker Ah’miah Harris also expressed her thoughts regarding the Blazer’s efforts to dig themselves out of a two-set deficit during their first match against Lee.

“We shouldn’t always have to come back,” she said. “We should always be ahead, in every single set.”

The match got off to a quick start with both teams proving nothing would be easy.

Despite VSU’s adjustments, the Blazers ended up falling short three points in the first set and four in the second. Once again, they found themselves in a hole that they could only escape through unity, grit and perseverance.

The Blazers attacked from the jump in the third set with a quick four points, two of which were aces by senior Olivia Piazza.

The Flames slowly came back, forcing the Blazers to battle to maintain the lead. VSU went on a 5-0 run after Lee tied the score 12-12. With a key performance from sophomore middle blocker Christina Pettigrew, the Blazers maintained the lead and outscored the Flames by three points.

Heading into the fourth set, the Blazers knew that they needed to keep their composure and poise.

The set started off with another 4-0 VSU lead, but the Flames again slowly battled back. The Blazers and the Flames battled back and forth, with the Blazers eventually pulling out the two-point lead at 28-26.

Lee fired off a quick seven points to begin the fifth set before the Blazers had an answer.

Sophomore outside hitter Mackenzie Murray interrupted the scoring run, scoring a kill to bring the score to 1-7.

The Flames, however, continued to attack.

After the Flames brought the score to 1-12, the Blazers’ efforts to fight back proved to be obsolete. Despite respectable efforts from VSU to chip away at the lead, the Blazers ultimately fell 7-15.

Prior to the game, Zoucha mentioned some recent injuries and setbacks that her team has faced during the last few weeks—many of which have forced players on the team to occupy new, unfamiliar roles.

“We need to be able to make adjustments and see who can fill those spots and get kills on offense,” Zoucha said.

Murray is one of the key outside hitters that VSU had been missing in the lineup. In her first game back on the court, Murray scored a staggering 19 kills, two aces, and five blocks: a performance essential to keeping her team in the game until the fifth set.

“Closing out games has been the mantra of our whole season,” Marshall said. “Our record does not reflect on how good our team is. Our team is way better than our record. A lot of our games have gone to five or four [sets], and we were close in all those games.”

Six of the Lady Blazers’ losses this season went to four or more sets.

Following a three-game stint in the GSC/SSC regional crossover on Oct. 14-15, the Lady Blazers will be back at home on Oct. 21 at 6 p.m. against Alabama Huntsville.

Previous Top Homecoming games of the last decade
Next Editorial: VSU’s changes amongst this Homecoming season