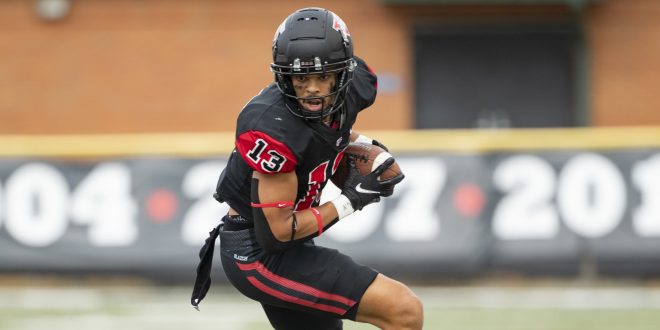 The Blazers’ defensive woes in the ground game reached a head at the worst possible time: on Homecoming.

The Blazers (3-4, 1-3 Gulf South Conference) had no answer for the Mississippi State Choctaws (4-3, 3-1 GSC) and their triple option attack, falling 49-40 Saturday afternoon.

The loss is the Blazers’ third straight, marking the first time since 2013 that VSU has lost three straight games. Additionally, the loss snapped an 11-game winning streak against the Choctaws, which dates back to their first stint in the GSC.

Most importantly, the loss all but assures that the Blazers will miss the postseason for the first time since 2017.

“We just weren’t good enough,” Jackson said. “I’m disappointed in this one. It hurts. It hurts because I thought we were ready to play.”

The Blazers and Choctaws combined for over 1200 yards of offense. However, it was the Choctaws who burned the Blazers time and time again with their ground game, totaling a school record 598 rushing yards and six rushing touchdowns.

The Blazers got on the board first almost immediately. Senior quarterback Ivory Durham broke loose for a 75-yard run, setting up a five-yard touchdown run by senior running back Jamar Thompkins.

The Choctaws wasted no time answering. Running back Marcus Williams received the pitch from quarterback John Henry White and sprinted for a 66-yard touchdown on the Choctaws’ first offensive snap.

VSU tacked on a field goal to make it 10-7, but it was all downhill from there.

A fumble by redshirt senior wide receiver Travon Roberts set up the Choctaws in Blazer territory. The Choctaws punched it in five plays later to take a 14-10 lead.

They would not trail for the rest of the game.

The Blazers trailed the Choctaws 28-17 at halftime. The last score of the half came on a 41-yard pass from White to Williams, one of just two passing attempts by the Choctaws.

The Choctaws continued their ground assault to start the second, taking up nearly seven minutes and tacking on another touchdown.

The Blazers did respond. The Blazers got the ground game working, and Durham scored from one yard out to make it 35-24.

However, it was not nearly enough.

A 78-yard run by Williams and a 73-yard run by running back Chris Colebank on back-to-back drives put the Choctaws up 49-24 early in the fourth quarter.

The Blazers finished the game strong, scoring the last 16 points of the game. Durham found graduate wide receiver B.K. Smith in the back of the end zone for an eight-yard touchdown pass to make it 49-32 with under 10 minutes to play.

However, the Choctaws drained nearly all of the clock on their next drive. The drive lasted nearly nine minutes before the Blazers made a goal-line stand.

Durham and the offense put together a quick three-play, 99-yard drive, capped off by a 31-yard touchdown pass to graduate wide receiver Justin Jeffery with three seconds left. However, the game was well out of reach.

Jackson wished the defense would have made more plays like the goal-line stand earlier in the game.

“I wish we had did that earlier,” Jackson said. “At this point, it’s like, ‘it is what it is.’ We need to do what we did late, early. And so why are we waiting to the end to do that? I mean, that’s on me, I guess, but we gotta get that figured out.”

Despite coming up short, the offense did its job. The Blazers had a balanced attack, rushing and throwing for over 300 yards apiece.

Additionally, Durham went 16-25 for 319 yards and three touchdowns and also ran for 115 yards and a touchdown.

Though Durham is primarily focused on the success of the offense, he and the offense still have the defense’s backs.

“We just have one mindset, and that’s to score,” Durham said. “We’re really not worried about what the defense is doing. We’re going to have their back regardless, and we’re just going to put up points.”

As for Jackson, he’s become all too familiar with how the games have played out.

“We came out, and we started fast again,” Jackson said. “We did stuff that what I thought looked like the right way, and then we go with the penalties, and we end up having to settle for field goals. It just, it just wasn’t good. So we got to figure out what makes us do that.”