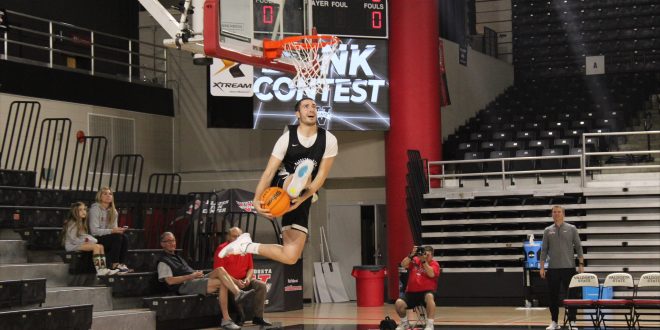 The VSU men’s basketball team is making their final preparations as the season draws near.

The Blazers will tip off their season in the Division II Tip Off Classic in Lakeland, Florida, against Lincoln Memorial on Nov. 5 at 3:30 p.m. and then Hillsdale College on Nov. 6 at 3:30 p.m.

Still, the Blazers return seven players, including four of the top five scorers, and have brought in eight more players this offseason. Head coach Mike Helfer thinks that the new players will help fix a variety of issues that plagued the team last season.

“We tried to get players that were diverse,” Helfer said. “We tried to get a diverse group to come in because, you know, we needed to fill in some places across the board. So that’s kind of what we were looking for as we recruited throughout this past year.”

One of the most prominent issues was consistency from beyond the arc. While the Blazers shot a respectable 36.2% from range last season, the team went cold during the back half of the schedule.

Helfer believes 3-point shooting has become one of the most important aspects to winning games.

“I just think the game has changed so much over the years, especially recently,” Helfer said. “I mean, you have to be, you know, respectable from the 3-point line, I think, to have a successful season. I think we found guys that can do that, and some of our returners have really worked hard to improve that aspect of their game.”

The Blazers have been picked to finish third in the GSC via the GSC Preseason Coaches’ Poll. Though the team has high expectations, Helfer believes there isn’t much pressure on the team heading into the season.

However, to meet those expectations, the Blazers will have to mesh together. Helfer thinks that the recruiting effort has helped ease the process.

“I think every coach has the same question or dilemma, or however you want to say it. It is how will they mesh,” Helfer said. “I think a lot of that goes back to your recruiting, to pay attention to the personality of players, their attitude, things that are not measured on the statistics side of it. “

As for their season, the Blazers face an uphill climb right out the gate. After their stint in Lakeland, the Blazers will travel to Pensacola, Florida, to play in the GSC/SIAC (Southern Intercollegiate Athletic Conference) Regional Challenge on Nov. 12-13.

“We play Lincoln Memorial and Hillsdale, and both of those are traditionally Elite Eight type teams, Final Four type teams,” Helfer said. “It won’t be games that you walk into, and you got to be ready to go. The next weekend, we play on the road and play Clark Atlanta and Fort Valley State, and those will be difficult games.”

Additionally, the GSC schedule offers no favors. The conference slate has expanded from 20 games to 24 games.
Still, Helfer is ready for the grind.

Most importantly, Helfer is hoping to see improvement over the course of the season rather than letting a tough early stretch serve as a measuring stick.

Previous Column: Recent controversies prove to be big yikes for Ye
Next Top 5 things to do before graduating