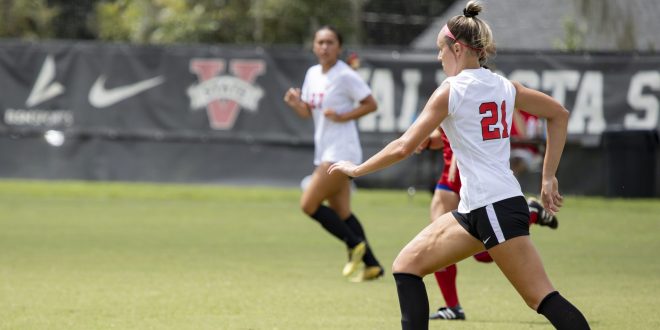 With a 4-11-1 record, the VSU women’s soccer team had as many losses this season as they had wins last season.

The statistics tell a story that highlights many areas that the Lady Blazers will look to improve on in the future.

The Lady Blazers’ sense of urgency to score led them to shoot the ball 229 times—nearly 70 more times than their opponents on average.

VSU’s fearlessness to shoot gave the Blazers many opportunities to score, few of which they capitalized on. Only 23 of VSU’s 229 shot attempts found the back of the net.

Their 10% shooting percentage, which was over eight percentage points lower than their opponents, made all the difference in close games.

“We knew that we weren’t going to score goals if we didn’t shoot, so our mentality as an entire team became just to take those shots no matter what the outcome,” sophomore goalie Emma Pruett said.

Pruett was the Lady Blazers’ primary goalie with 36 saves and a 63.2% save percentage. She finished eighth in the conference in goals against average at 1.656.

Despite the goalkeepers’ efforts to prevent other teams from scoring, many games ultimately came down to VSU’s scoring ability on offense.

“You can’t win games without scoring, so with us not scoring, it was really hard for us to win games,” Pruett said.

The VSU soccer team had several scorers, none of which scored over five goals in the season. Sophomore forward Molly Wooldridge led the team with five goals, followed by freshman midfielder Victoria Bahr with four.

However, their lack of scoring was not due to a lack of preparation.

“Coach would make sure that our shooting drills were game-like,” sophomore defender Abigail Snyder said. “He would make it so that we wouldn’t crack under pressure in games. We practiced every possible situation that we could.”

The Lady Blazers put a special emphasis on shooting and finishing in their practices to prepare themselves for game situations.

“We would always work on shooting in practices,” Pruett said. “Coach would put up a net on the goal that only had openings in the top corners and the bottom corners to help us learn to shoot accurately and finish.”

Despite these efforts, the Lady Blazers seemed to struggle in the heat of battle.

“It felt like we were practicing everything we needed to but still weren’t able to do it in the games,” Pruett said.

Due to the lack of scoring, a lot of pressure fell on the defensive players.

The goalkeepers felt a lot of weight on their shoulders to keep the Lady Blazers in the game.

“I mentally struggled this season just because I felt like I had so much pressure on me,” Pruett said. “It felt like if I made one mistake, I would lose the game for us.”

In the second half of the season, the Lady Blazers suffered an eight-game losing streak. During this time, the team faced mental challenges that made it difficult to perform.

The Lady Blazers’ response to mistakes cost them in the long run. Toward the end of the season, after the Lady Blazers lost their chances of playing in postseason games, the players turned to each other for inspiration.

“We worked for each other because we wanted the seniors to be able to go far,” said Pruett.

The Lady Blazers are hopeful as they look to next season.

“This season was really an eye-opener for us,” Pruett said. “It made us realize we can do it. We had a rough season—we move on from it, we learn from it, and we get after it next season.”

The Lady Blazers will return to action in 2023.