Patrol cars from counties and cities across South Georgia lined the corner of Oak Street and Baytree Road at 8:00 last night for a sobriety checkpoint as part of the Governor’s Office of Highway Safety’s 18th Annual Hands Across the Border.
Georgia officers teamed up with its five bordering states for a six-day highway safety awareness campaign. The campaign serves as a reminder to citizens that these states operate under a zero-tolerance policy since Labor Day weekend is coming up, according to Katie Fallon, Public Information Officer for the Governor’s Office of Public Safety.
The South Georgia route started in Columbus, Ga on Aug. 30 and will end in Kingsland, Ga on Sept. 4, with stops across the state. The south route doesn’t typically included Valdosta, but the Governor’s Office of Highway Safety, or GOHS, decided to switch it up this year, according to Fallon.
“When checkpoints are made in college towns, people think we’re out to get students, but we’re not targeting students, we’re making the community safer,”  Fallon said.
More than 100 uniformed officers from counties such as Echols, Cook, Tift, Lanier, Ben Hill, Irwin, Berrien, Brooks, Clinch, Coffee, and Lowndes made up the patrol at the checkpoints across Valdosta.
“This event is a big show of brotherhood of law enforcement across the counties,” Fallon said.
Arrests made at these checkpoints usually range from DUI to drug possession, to driving without a license or driving with a suspended  license, according to Fallon.
At least one arrest was made during the roadblock, due to driving with a suspended-out-of-state license, according to the suspect’s acquaintance who identified himself as her boyfriend.
The offenses made typically depend on the location and time of the roadblock. Friday nights are usually different from  Wednesday nights Fallon said.
Look for updates to be available on the Spectator website regarding overall statistics of the roadblock.

Previous Rant and Rave of the Week: September 3, 2009
Next Campus Police give students a few safety reminders 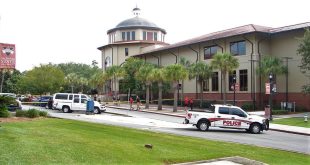