DeMario Jones, SGA presidential candidate, attended a platform on Wednesday night discussing his goals for the upcoming SGA elections on April 19-20. Jones, a senior Political Science major from Jacksonville, Fla., discussed his plans to “see things through” if he were elected. Jones is a two-year captain for the Blazers football team and the President of the Model Senate.
Jones’ first major issue he plans to change is the current academic forgiveness policy. Under the current policy, if a student retakes a class he or she once failed, the grade applied to the GPA would be an average of both of the grades the student received in the class.
Jones believes that every student deserves a second chance, so under his revised policy, the second grade the student receives in the class would be the only grade counted towards their GPA. Coincidentally, this policy is already in effect on many other universities in South Georgia.
Another major issue that affects students living on and off campus is parking. According to Jones, “plenty of parking spots for faculty and staff go unused and we would be working closely with Parking and Transportation to change that.”
Other plans Jones discussed at the platform include increasing school pride with tailgates before games, communicating effectively with the Faculty Senate, and addressing the needs of all students by realizing that “different students have different concerns.”
Although this is Jones’ first semester in SGA, he sticks by his slogan to “change the campus by changing conversation” by opening the lines of communication between the student body and the senate.
Jones plans to represent VSU’s campus and student body through exhibiting his good sportsmanship on and off the field and recognizing VSU is a “special place, with special people, who deserve an agenda and platform with special potential.”
In his closing statements, Jones assures voters that he will listen to the needs of the students before he acts, but says the only way that he can make changes is if the students bring their problems to light.

Student Government Association presidential candidate, Chris Nish, gave some reasons he thought students should vote for him and why he was qualified for the position of president at the SGA Platform event held Wednesday night.
“My experience, I have served on six [executive] boards, my excellence, I strive for excellence in everything I do and my empathy for students, I want to portray what you guys think to the administration,” Nish, said.
Nish currently serves as SGA’s Vice President and has been a part of SGA for a year and a half.
Nish is a junior Business Management major, President of Order of Omega and also previously served as a Vice President for his fraternity, Tau Kappa Epsilon.
Issues that concern Nish include parking, student amenities and tuition increases.
When asked about the tactics he would use to fulfill the goals of SGA, Nish spoke of his leadership skills.
“I believe I am fairly connected with organizations, individuals and faculty,” said Nish. “I am also comfortable working with administration.”
Goals for SGA included better communication.
“We need better communication between the students and faculty and within the senate,” said Nish.
One event that Nish said would benefit the students is a big meet and greet with the senators.
When asked about working with a newly elected executive board, Nish had high hopes.
“I feel I will work well with any of these candidates because they are all qualified,” said Nish.
Current SGA President Kelli Cody asked candidates if time would be an issue if they were elected.
“I see no problem with time,” said Nish.
Another question was asked about how candidates would represent VSU.
“I feel I did a good job representing in SACS by asking questions that are intelligent,” said Nish.
In closing statements, Nish talked about why he she be voted in
“My experience, my excellence, my empathy for students,” said Nish.

Presidential Candidate Ryan Brown shared his platform, his experience with SGA, and answered questions from students at SGA’S Platform meeting in Powell Hall Wednesday night.
Brown is a sophomore political science major and has been in SGA for two years.
Brown was a parliamentarian in his freshman year and a senator in his sophomore year.
“I’ve been watching and listening to what’s been going on and I think it’s time for a new president, a new administration and time for changes in our system and university.” said Brown. Along with his experience with SGA Brown is also a Resident Assistant in Hopper Hall and a member of the Alpha Phi Alpha fraternity.
In his two years in SGA, Brown has learned about the importance of the students, the faculty, and the responsibilities he will have if elected President. “It’s not just a Monday night job. It requires travel and a lot of time and I have made time. I scheduled my classes around the Planning and Budget Meetings.”
Brown also answered questions about events that he has provided significant change to.
In his campaign Platform, called the New Deal, Brown has worked with Vice Presidential candidate Jasmine Coer on creating proposals they will take on if elected as President and Vice President. For student fees, they plan on educating the students on where students fees go, and plan to halt any increases unless it is necessary for the well being of the student body.
Brown also discussed some of his plans to expand more parking for students. Another proposal Brown has is possibly changing the food portions at The Loop. Instead of serving 5 oz. burgers, Brown proposes that the restaurant should serve 3 oz. burgers so they can offer alternative sizes of food and not just slashing prices.
The presidential candidate discussed the importance of working with the faculty here at VSU. “We represent the student body. When meeting with the faculty you have to know what you’re talking about. You can’t go to court without a defense because you will lose.” said Brown.

Previous Baptist Collegiate Ministries invites students
Next Who will you vote for? 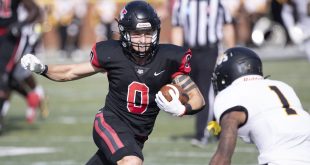 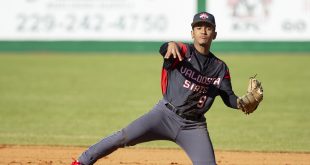 It’s a new season and a new squad for Blazer baseball. The 2022 regular season ...