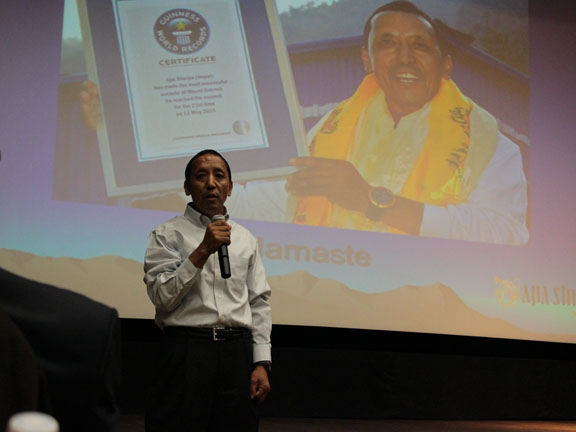 Apa Sherpa holds the world record for successfully climbing Mount Everest twenty-one times between the years of 1990 and 2011.

The evening’s speakers took the audience from the streets of Kathmandu to the top of Mount Everest, telling stories of struggle, strength, and overcoming adversity.

Sherpa began his presentation with a brief video about his accomplishment, and then showed the audience photos from his life as a porter in Nepal, describing his experiences guiding Westerners to the top of Mount Everest.

“I wanted to be a doctor,” Sherpa said. “But I had to drop out of school and work as a porter to support my family.”

Sherpa described his love of education and the dire conditions of the school house in the Thame Village, his hometown in Nepal.

“Without education, we have no choice,” said Sherpa.

Sherpa eventually relocated himself and his family to Utah because he wanted his children to get the education they deserve.

Sherpa’s love for education that inspired him to create the Apa Sherpa Foundation.

The mission of the foundation is to help the children of Nepal receive a better education so they can achieve a better future.

After Sherpa concluded his presentation, the evening continued with a reading from Dr. Samrat Upadhyay, author and creative writing professor at Indiana University.

Upadhyay has won several awards for his writing, including the Asian American Literary Award, the Society of Midland Authors Book Award, and the Whiting Writer’s Award.

His works have also been translated into French, Greek, Czech, and German.

He read three pieces; one non-fiction essay that tells the story of the troubled monarchy in Kathmandu, one short fictional story about the influx of hippies into Kathmandu that occurred in the late 1970s, and an excerpt from his upcoming novel, The City Son.

“Dr. Upadhyay’s readings were cool to hear because they connected with the background of Nepal, which Apa described to us when he told us about his experiences,” Sydney Devine, senior English major, said.