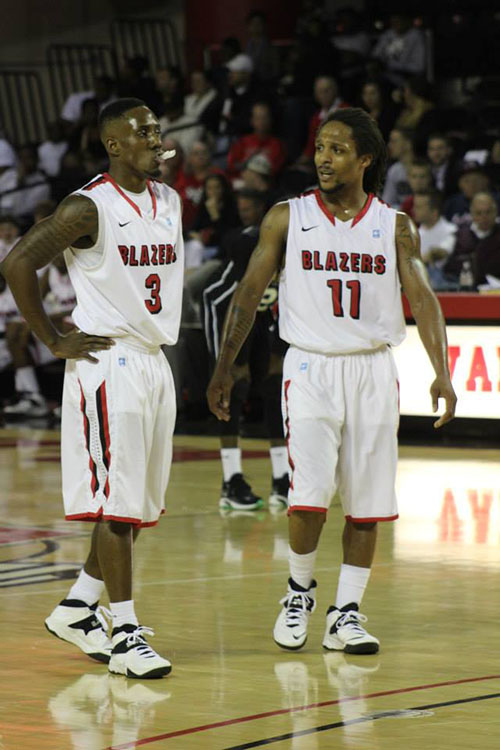 A 16-12 season certainly will not be remembered as one of head coach Mike Helfer’s greatest seasons. Following another season of roster renovations, this season represents a transition period for the veteran head coach that may propel the Blazers back to prominence next season. On the surface, the Blazers were a Jekyll-and-Hyde bunch much of the year, devastating and dominant at times, inconsistent and incapable at others, which could be expected when integrating 11 new players. The Blazers’ season ended last Saturday with an 88-79 loss to eventual champion North Alabama in the semifinals of the Gulf South Conference tournament. “It was an interesting year; at times we showed a lot of potential and high quality of play, and other times we did not perform up to that level,” Helfer said. “A lot of people, including myself, were hoping that high quality of play could’ve carried us to more wins than we ended up getting. “Our guys played hard, and I really liked the way they played in the conference tournament, which is always a good sign as we head into next year,” Helfer said. The Blazers’ flaming out down the stretch can be attributed to their general lack of size, which was no more apparent than in the loss to UNA. Trailing by 14 at halftime, the Blazers battled back with a series of defensive stops. Colin Cook, the GSC’s leading shot-blocker, fouled out with 3:59 to play. Jeremy McKay’s three-pointer gave the Blazers a 74-72 lead with 3:09 to go. Shortly thereafter, 6-foot-7-inch Breon Dixon fouled out as well. With their rim protectors out of the game, VSU had to use 6-foot-4-inch David Murray at center the rest of the way. Consequently, UNA scored on drives to the rim to retake the lead and pull away. As Helfer points out, addressing those size issues will be a priority in recruiting. “We’re going to have to get some power forwards or even some big threes that can help us on rebounding,” Helfer said. “Sometimes you look at specific positions, and sometimes you look at best available, so I think both of those scenarios will come into play through this spring recruiting period.” The Blazers jumped out to a 7-0 start and garnered a spot in the NABC Top 25 rankings, averaging 88.5 points per game over that stretch. The Blazers pushed their record to 9-1 before dropping four of their next five games; this led to Helfer implementing a dribble-drive offense to improve the team’s offensive efficiency. “I thought we really fell into the dribble-drive offense,” Helfer explained. “When you have guys that are really good off the dribble, there’s a system to utilize their strengths. I would love to have that offense in place for an entire year, so that’s something we’ll look at in the offseason.” Despite going 12-2 at home, the Blazers struggled mightily away from home. The Blazers were only 4-10 away from The Complex. The Blazers lost nine games by 10 points or more this season. In comparison, the 2012-13 Blazers only had two losses by double digits. “We didn’t shoot it away from home very well at all,” Helfer said. “That’s something I’m not sure you can address (personnel-wise); you’ve just got to have kids with the confidence to go into other people’s house and make shots.” Despite a disappointing record, the Blazers’ seniors shined through: David Murray was a Second Team All-GSC selection and fellow senior Jeremy McKay was named to the All-GSC Tournament Team. Heading into his tenth season at the helm of VSU basketball, Helfer believes transitional years come with the territory when building a successful program. “It’s the nature of Division II,” Helfer explained. “Whether you’re here one year or 10 years, you’re just trying to find players that fit not only your program but the school. We’ve slowly started to build back the brand of Valdosta State. That seems to be coming back, as you can see from our crowds on the road.”

Previous NCAA bracket picks: Who are you?
Next Smell-o-vision