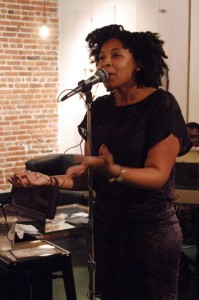 VSU junior Maya Newsome has successfully made one of her dreams come true: in June, she self-published her first book of poems, “Things I Wrote by the Window.”

All written within the past two years, the 25 poems found in “Things I Wrote by the Window” encompass love, self, faith, the world and life observations.

Newsome started writing poems when she entered high school at the age of 14, writing mostly about love and crushes. However, as she grew older her thoughts turned political, religious and “all over the place.”

Newsome, after wanting to publish her poems for about a year, decided to take her collection to publishing companies in Atlanta.

The companies liked her work. However, some wanted to change, take out, or have her write a few new poems, all while taking about 80 percent of the profits. So she came up with an alternative.

“I don’t do well with people telling me what I can and can’t do,” said Newsome. “So my mom suggested to self-publish as a joke.”

Newsome does everything online herself including the editing, packaging and shipping. So far, she has sold about 90 percent of the total printed books, selling out last Friday at her book signing at Grassroots in downtown Valdosta.

“The people in Atlanta and the publishing companies who said that it wouldn’t sell were wrong,” said Newsome.

Inspiration comes easy for Newsome, as she could be in class, listening to other people’s opinions on things or even lying in bed at night when it hits her. And when she gets started writing, she has to finish it.

Her biggest inspiration and supporters are her parents, her boyfriend Joshua, and her fellow Deep Release performers. The Deep Release poetry society is a poetry club on campus.

Now 19-year-old Newsome is studying Early Childhood Education at VSU because of her love for kids.

“A lot of people don’t really understand why I am [an Early Childhood Education major],” said Newsome. “I just have a gravitation towards kids.”

Eventually, Newsome wants to open an arts center for kids, targeting inner-city children specifically, to make them aware of the possibilities in the world, such as music, writing and art.

“I like to think of it as an artistic boys and girls club,” said Newsome. “There are so many other things that you could do, artistically, that you could make a living out of.”

In her already successful life, Newsome wants to inspire people, either through poetry or in the classroom and wants to be able to impact somebody’s life in a positive way.

Newsome encourages people to express their opinions in artistic ways, not just poetry.

“Things I Wrote by the Window” is available online at thingsiwrotebythewindow.tumblr.com for $15 with shipping.