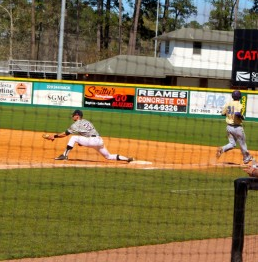 After losing three of their last four games, VSU (13-6, 7-4 in Gulf South Conference) bounced back Tuesday with a dominant 24-9 win over Georgia Southwestern University (5-15).

This was the second matchup this season between these teams with GSW getting the best of the Blazers 14-2 back on March 4.

It was apparent that VSU was looking to come out quickly and get over the struggles of last week that saw the team go a disappointing (1-3) overall. With 20 runs scored in the first six innings on Tuesday, it’s safe to say the Blazers did just that while trying to jump back into their winning ways.

Senior all-GSC performer Bryant Hayman led the way for the Blazers once again going 2-6 with a homerun, three runs scored and four runs batted in.

Only 19 games into the season Hayman now sits with a .417 batting average and his six homeruns and 28 runs batted in are good enough for first in the GSC.

Backup catcher and first year Blazer Zac Goodno has proven to be a valuable addition for head coach Greg Guilliams and added a homerun and five runs batted in as well.

His bat has seen him get an increase in playing time recently as Guilliams has been finding anyway he can to keep the Winthrop University transfer’s bat in the lineup.

Goodno, who has been finding himself starting in left field recently, has given Guilliams a bit more flexibility now when filling out his lineup cards for a team whose weakness this season has been defense.

With already 29 errors on the season, it is a problem Guilliams is fully aware and hoping to solve and find an answer to quicker rather then later.

VSU has committed two or more errors in six games already this season going just (2-4) in those contest.

When a defensive is constantly making errors and giving the opposing team extra outs, it makes it near impossible to compete on a nightly basis.

Tuesday night the Blazers finished with 1 error for only the second time this week, Guilliams will look for his squad to build off that and continue to play defense at the level he knows they can.

VSU will head to Dahlonega, Georgia, on Wednesday to take on the University of North Georgia in a rematch of this year’s season opener that saw the Blazers walk away with a 7-5 win.

Previous Letter to the Editor: VSU professor stresses the need for humanism in education and politics
Next SNL takes on ISIS

Valdosta State knew the top seed in the tournament came with expectations. Montevallo gave it ...