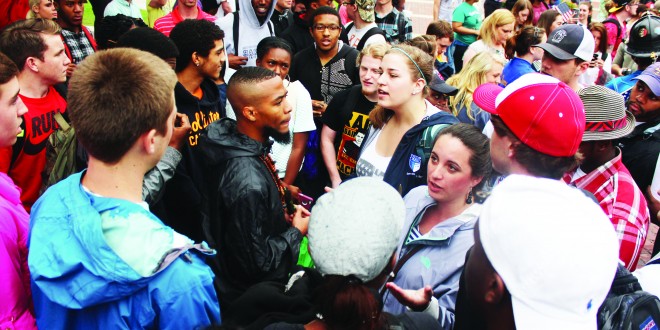 John Preer/SPECTATOR Sheppard shares his views with students at a protest on April 20, a few days after he was seen stepping on an American flag.

Michelle Manhart, the Air Force veteran who was briefly detained and then banned from VSU last week after attempting to take a flag from protestors who were stepping on it, has called for an amendment to the Constitution as well as a demonstration around campus.

During the protest on Friday, Manhart initially wanted to get the flag off the ground, but the ensuing media firestorm has inspired her to push for an amendment that would make harming the flag illegal.

“I’m pushing forward that we can go ahead and make an amendment that says it is illegal to harm the flag in anyway,” Manhart said.

Manhart was surprised that a video shot by her daughter during the incident became so popular on social media.

“When we posted [the video] originally, we were kind of hesitant of whether we should or should not,” Manhart said. “And my daughter told me a little while ago that it’s at 5.5 million [views].

“When we posted it, I thought, well, if a thousand people see this then we can make a difference, we can change something.”

Manhart disagrees with critics who say she stole the flag from the protestors.

“I don’t personally feel I was stealing anything,” Manhart said. “If you’re going to throw the American flag, our iconic freedom symbol, on the ground, kick it and stomp on it, you don’t want it anymore, so I’ll take it to somebody who does want it.”

Manhart plans to continue her crusade with a rally beginning at 1 p.m. Friday at CrossPointe Church. A Facebook group announcing the event had 3,700 people planning to attend as of late Wednesday evening.

“I can’t go on campus, obviously, and it’s hard for me to support people who are doing things,” Manhart said. “I feel they’re supporting me, so the way I’m going to give back is we’re just going to meet, and we’re going to do continuous circles around the campus on motorcycles and cars and anybody who can make it out.”

Manhart said the support from the community has been overwhelming.

“My hat is off to everybody in town and all the young students who are participating in this,” she said. “I mean, whether you are for or against it, everybody is coming out and making a stance.”

Previous Horoscope: Daily Forecast 4/22/15
Next The science behind sticking to your race