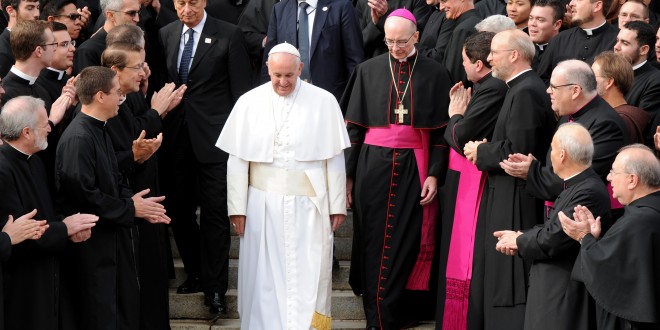 Pope Francis makes his way down steps to pose for a photo with seminarians outside St. Martin of Tours Chapel at St. Charles Borromeo Seminary following his address to the bishops on Sunday, Sept. 27, 2015. At right is Rev. Timothy Senior, rector of St.Charles and Auxiliary Bishop of Philadelphia. (Tom Gralish/Philadelphia Inquirer/TNS)

Pope Francis, head of the Roman Catholic Church, arrived in the United States for his first American tour Tuesday afternoon to a rock star’s welcome. He was greeted by President Obama, Vice President Biden and their families, as well as an enthusiastic crowd. The Argentinian-born pope has held the position of supreme pontiff ever since his election which followed the historic resignation of Pope Benedict XVI in 2013 amid the child molestation scandals that rocked the Catholic Church.

Since then, Pope Francis has been a media sensation due to his precedent-breaking modesty, activism, and views. Unlike Pope Benedict before him, Pope Francis has taken very vocal and unorthodox views on many social issues such as income inequality and poverty. He has also received much support for his more forgiving views of homosexuality and contraception.

Despite his popularity, Pope Francis’ visit to the United States will not be free from controversy. The Pope has voiced many views that are quite divisive in the United States; offending both Conservatives and Progressives on issues such as abortion and economic inequality. Even Catholics like presidential candidate and New Jersey Governor Chris Christie have challenged the Pope.

“The fact is that his infallibility is on religious matters, not on political ones,” Christie said.

Pope Francis made a televised address to a joint session of Congress early Thursday morning.

Previous Comedian’s fat shaming more cruel than funny
Next Editorial: Wrap it or don’t tap it