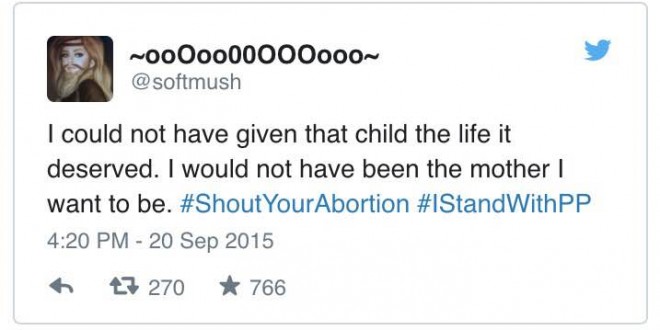 Abortion has been a very hot and touchy subject recently.  There has been quite a lot of debate between pro-life and pro-choice supporters, especially with Planned Parenthood being defunded.

A group of women on Twitter began the #ShoutYourAbortion campaign in order to get rid of the stigma associated with abortion.  Every woman has her story and this movement is to help her share it without shame.

Some women may believe in abortion and be pro-choice, but choose not to get an abortion out of fear of being shunned or ridiculed.   Other women may have had abortions but have chosen to keep it virtually a secret.  But the #ShoutYourAbortion campaign is helping women make their own choices about their own bodies.

This movement is definitely helping women gain the confidence they need to take control of their lives.  Not everyone agrees on abortion but so long as it is legal, a woman should not be stopped from making choices for herself.

There are so many reasons why someone may choose to get an abortion, and although I may not personally agree with every situation in which a woman has an abortion, she still has the right to do what she wants with her body.  I have the right to my own beliefs, and she has to right to her own actions. And I cannot infringe upon someone else’s rights

America is supposed to be a country where we can all freely do as we please so long as we do it legally.  Unfortunately it is not quite like that.  There are some people who, if you do not do what they do or believe what they believe, will try to make you feel ashamed of yourself.  #ShoutYourAbortion is providing equality by taking away the ability to make women feel ashamed of abortion.  The equality it provides is not so much between men and women, but between different beliefs.  One belief should not be considered right and another wrong in a country where you are free to believe anything.

#ShoutYourAbortion is needed by women, and it is a good cause.  Even if you do not support abortion, it should be known that this movement is important, because it is another step towards total equality in America.