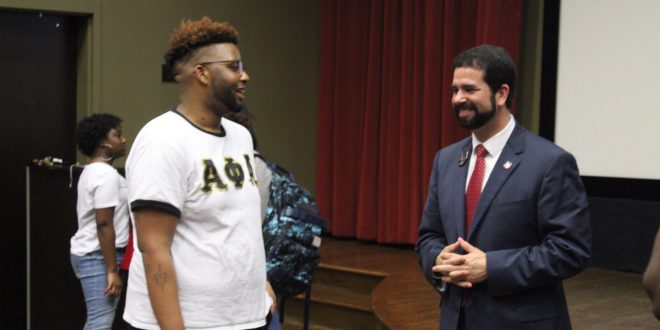 VSU President Richard Carvajal is listening. And students gave him an earful.

This meeting was not a response to any one incident according to the two leaders but the forum did come a week after the protest conducted by the two organizations.

One of the main goals of the protest was to have administrators support for minority students on campus. Students wanted that support through Dr. Carvajal or other administrators at their events.

Dr. Carvajal informed students that he hasn’t been avoiding any one group of students.

“If you come to basketball games, you know have not been hiding,” Carvajal said.

He then started explaining his history. That is something that neither of his interim predecessors did.

He began by explaining his childhood, which included his homelessness during high school and how he was forced to live in his car.

He told students how he battled pancreatic cancer while on the way to a triathlon in Alabama.

“I’m the homeless president and I’m the guy that won his battle with cancer,” Dr. Carvajal said.

He told students that he didn’t share his stories for their sympathy but to better understand him and his past.

Dr. Carvajal allowed students to go around the room and address issues on housing and residence life, transportation and campus communication.

Once all of the students spoke, Dr. Carvajal implored students to look at their role in the Blazer experience saying: “Success and failure are concreted by administration and students alike.”

Dr. Carvajal challenged students to make sure that they are practicing what they preach because he has not seen them at several events that he has been at.

He said that his administration has the mission of serving south Georgia.

After the meeting Dr. Carvajal said he is working with SGA to have more forums where students will be able to directly speak with him. One of his goals are to build trust between students and administration.

“I hope folks wont judge me off of what happened before I got here,” Carvajal said. “I hope we will look at what we want to create together going forward. We need to work together we need to build something that we are even more proud of than we are already.”