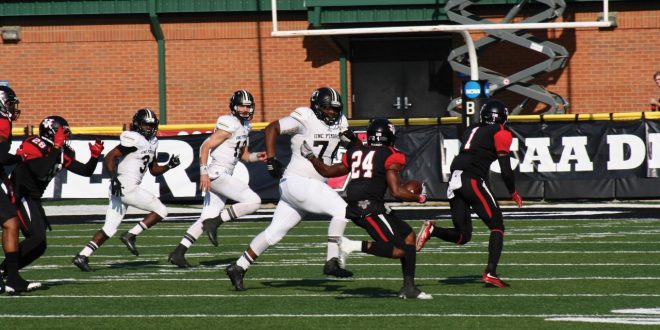 Kenny Moore: from concessions to draft

This year will be Kenny Moore’s sixth year playing football. Most players sixth year came in middle school or high school, but Moore will be looking to help an NFL team in 2017.

Moore is a Valdosta native, and he played four years of football at VSU. He is fifth all time in VSU history with 11 interceptions, and he was selected to the All-Conference, All-Region, and All-American teams multiple times while playing at VSU.

All of these honors came after playing organized football for only one season at Lowndes High School.

Moore played soccer, basketball and ran track before being convinced by one of his track teammates to join the football team for his senior year. Prior to taking the field on Friday nights, he helped his basketball coach at the football games’ concession stands.

“My basketball coach ran the visitor side concession stands at Lowndes games,” Moore said. “He was asking if anybody was free to help him. I was the one that said yeah, I could do it.”

Upon joining the team, Moore immediately made an impact for the Vikings, who went 9-2 and made a trip to the 2012 GHSA AAAAAA Playoffs.

Moore earned a football scholarship to VSU after his senior year and was one of the few freshmen who played in every game for the Blazers the next season.

“Starting out I didn’t have the intentions of playing,” Moore said. “I ended up starting a game freshman year, and I’m thankful for that. It was really the guys who came before me who taught me how to be a college athlete.”

It wasn’t always easy for Moore though, especially after only playing two years. He contemplated leaving school during his freshman year at VSU.

“My mind has been a lot of places,” Moore said. “I didn’t expect to play. I was actually about to go to the Air Force my second semester of college if I did not play my freshman year. It was all God. It’s just the path he wanted me to take. “

Moore said he thinks about that decision a lot.

“It means a lot to me,” Moore said on being able to play at VSU for four years. “I’m very thankful that God gave me this opportunity to be where I am. I never saw any of this coming. It feels like a dream. Every day I wake up I say wow, I’m really doing something that a lot of guys really wish that they could be doing. I just give thanks to my family and God.”

Moore and his family have been through a lot of adversity, especially when he lost his father in February of 2016.

“We lived in the same city growing up but things didn’t work out with me and him getting along,” Moore said. “For some reason one night I had a dream, and I guess it was God, and it told me I should get closer to him. It was about November of 2015, I reached out to him and we ended up getting closer over the months. As we talked and talked and went out or just hung out he ended up getting sick.”

His father eventually passed on February 7, 2016.

Suffering such a tragic loss was a setback for Moore, and his academic and athletic life suffered as a result.

“I thought I had an injury, I was away from everybody for so long,” Moore said. “It was a tough moment in my life. I missed a lot of school and a lot of workouts. I thought that was it [for me], but God picked me up.”

Moore went on to have his best statistical season at VSU. He had 65 tackles, eight pass breakups and five interceptions, leading the team in all of those categories. All while being converted from cornerback to safety and playing under a new coaching staff.

Moore shined the brightest in the Blazers’ first round loss to UNC-Pembroke. He had 10 tackles, two tackles for a loss and two interceptions in the 24-21 loss.

Moore racked up a host of accolades in his final season at VSU, including GSC All-Academic team and being named a First Team American Football Coaches Association All-American.

Once Moore’s playing time was over at VSU, and graduation came and went, he began a journey to becoming a true NFL draft prospect.

He was invited to play in two collegiate all-star games. After standout performances in both games, he signed an agent, who sent him to Indiana for two months where he focused on preparing for his pro-day.

Moore participated in a regional combine in New Orleans two days before he participated in VSU’s pro-day. He was also invited to participate in a pro-day at Kennesaw State University, where he got more exposure to NFL teams.

The workouts resulted in Moore receiving phone calls from teams such as the Kansas City Chiefs. He has talked to teams about being a nickel corner back because of his size, but he said feels that he can fit anywhere.

“Typically they’d pick a nickel because he is not as tall but, I have long arms and big hands,” Moore said. “I’m pretty smart, and my film shows how I can play.”

Moore said he doesn’t have a dream destination where he wants to play, at least not yet.

“I’m not really counting on any team, in my head,” Moore said. “I would go anywhere. I’m thankful for any place that I go. I just don’t want to bounce around. I just want to get somewhere and be a franchise player.”

Moore’s time at VSU has etched him in history as one of the best players to come through the football program. He is now trying to play at the next level, which is something few Blazers have done.

“For the guys that I’ve already played with, I wish y’all the best, and I hope we meet at the top,” Moore said. “[For] the guys under under me, don’t be a follower first of all. Be a person with a good head on your shoulders. Be a student first, take care of business. Anything you put your mind to, if it’s football or it’s not, try your hardest at everything you do.”

The draft begins on April 27 and will last three days for the seven rounds of selections. If Moore is not selected, he could still be signed to a team as an undrafted free agent.

“My time has come to an end as far as college, and I’m just preparing myself for everything that is at stake,” Moore said.