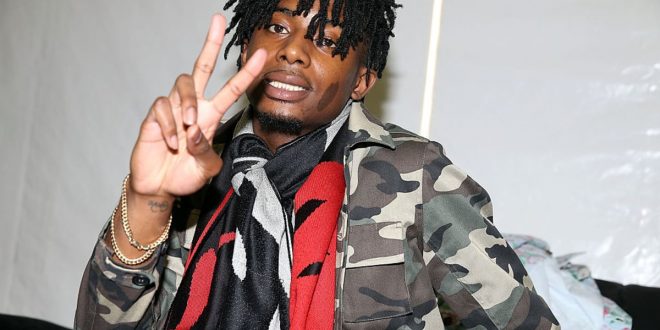 Playboi Carti has 2017 in his sights with his first self-titled mixtape.

Jordan Carter, otherwise known as Playboi Carti or Cash Carti, decided to release his first long-awaited mixtape. After emerging on the scene with hit singles, such as “Broke Boi,” “What,” and “Fetti,” the Atlanta native became one of the most anticipated artists in the hip-hop industry since 2015. From working with talents such as Lil Uzi Vert to U.K. grime artist Skepta, Playboi Carti’s self-titled mixtape should set all fans demanding a compilation of work.

Although “Playboi Carti” reaches the bar set from previous releases, his most recent effort goes no futher.

The introduction, “Location,” opens the tape with a wavy, dreamy synthesizer, accompanied by the standard teamwork of the 808 kick, snare and hi-hat and then a distinctive guitar rift. Although hip-hop producer Harry Fraud brings this dreamscape to life, Carti drunkenly stumbles over the beat, repeating lines such as “Tats on my neck and my arms” and ad-libs of “what” and “yeah” caked over the beat.

Even if “Location” doesn’t serve as the most lyrical track, the vibe and essence can be felt. This serves as one of the few highlights accompanied by “Playboi Carti,” as Carti’s producers steal the show with such bouncy and experimental instrumentals.

“Playboi Carti” continues with “Magnolia,” serving as another highlight where the producer shines brighter.

The track immediately opens with Pierre Bourne’s signature tag, sampling from “The Jamie Foxx Show,” and then transitions into sampled flutes with a contagious rhythm, seizing the listener’s attention. Carti’s voice fits perfectly into the beat with a hook that reels his audience in but is sugar-coated with ad-libs that could give Chip Skylark a cavity.

The tape continues with previously released tracks such as “Lookin” and “Wokeuplikedis,” collaborating with labelmate ASAP Rocky on “New Choppa,” bringing a slightly unique sound but only deviates due to the feature included.

When listening to Playboi Carti, substitutes such as Lil Uzi Vert, Future or Lil Yatchy serve as more prominent artists to tackle Playboi Carti’s lane. With “Playboi Carti,” Carti doesn’t bring enough distinctiveness to the industry to separate himself from the pack.