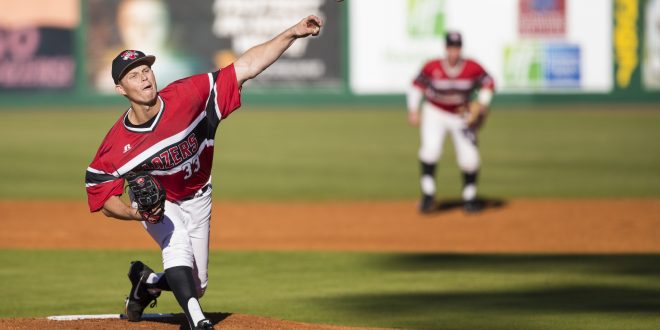 Above:  Blazers pitcher, Austin Hamilton, who led the the Gulf South Conference in strikeouts with 103.  Photo courtesy of Valdosta State University.

The left-handed pitcher joined the organization as an undrafted free-agent on Wednesday.

Hamilton appeared in 17 games for the Blazers averaging about five innings pitched per appearance. He had a 5-6 record and had a 4.08 ERA.

Hamilton had a star performance against North Alabama on April 30 to cap off the regular season. He struck out 10 batters and allowed two runs through seven innings pitched, completing a weekend sweep of the Lions.

Hamilton also joins Hayden Jones, Dominic DeMasi, Brandon Decker, Brandon Graves and Matt Costello as baseball players that have either been signed or drafted from VSU in the last decade.