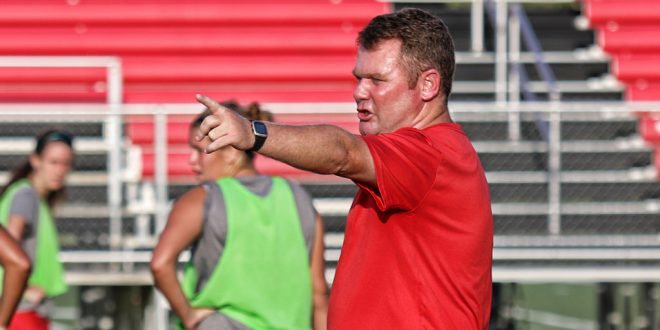 The Blazers were picked to finish ninth in the conference in head coach Stephen Andrew's innagural season at VSU.

Kicking and Screaming: Blazers preparing for match with Rams

Soccer preseason is in full throttle and new head coach Stephen Andrew has already begun to see improvements in the team.

The Blazers officially started practicing on Aug. 9, and they participated in their first exhibition game against Thomas University on Aug. 13. The team won the game 4-2, giving them a strong outlook on the season ahead.

“During preseason, it gets boring kicking around with the same people, so exhibition games really help us with practice,” Andrew said. “It helps us get game film and know what is up within the first couple of days of the preseason.”

Andrew has been working on building the fitness of the team. This year’s team roster includes a variation of freshman, transfer and returning students.

Besides dodging the South Georgia weather and working on improving the overall fitness of the team, they’ve been preparing freshman for the speed of a collegiate game during their two-a-day practices.

“At practice, we were doing a fitness test in the mornings and full field scrimmages during our afternoon practices,” Lindy said. “During our practices, we are working on things like getting the ball down the field and scoring goals.”

This season, the team is focusing on being more athletic and pressing harder on offense in order to get down the field and score goals. According to Andrew, he’s already seeing talent in players that he thinks will contribute to the starting lineup. However, he knows there will be a competition for play time once the season begins.

“Some freshman transition into the program easily, and others struggle at first but as the season approaches, there will be a lot of competition amongst the team for a starting position,” Andrew said.

In the past, the team has struggled to climb the ranks of the Gulf South Conference. In the conference preseason coaches’ poll, the Blazers were selected to finish ninth in the conference.

The first game is scheduled for Sept. 1 against Albany State in Albany, Georgia.

“We have a couple of weeks to get ready, but I am very excited for the season and eager to see how everyone plays together,” Lindy said.