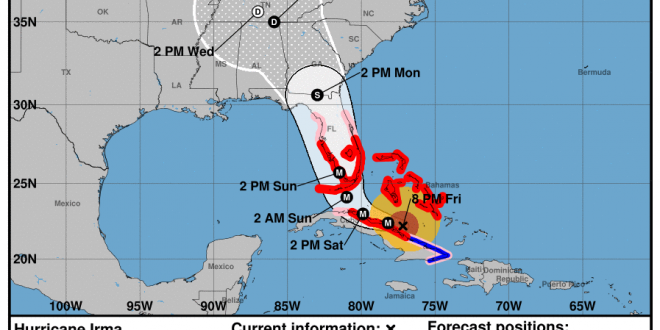 On Sept. 8, 2017 at 8 p.m. the National Weather Service released new predictions that show Hurricane Irma set to make landfall in Naples, Florida early Sunday morning. This is after the storm passes over Key West, Florida and could potentially make landfall as a category 4 or even a category 5 hurricane over Key West. It is expected that winds at this time will exceed 110 mph.

The storm is on track to move into Southeast Georgia on Monday morning a few hours before noon. Orlando, Florida, which lies halfway between the southern tip of Florida, where landfall is projected to occur, and Valdosta, Georgia, is expected to be covered by Hurricane Irma on Sunday evening near 8 p.m. Due to this anticipate clouds and winds to roll into Valdosta around 8 a.m.

In the newest forecast Valdosta is set to experience the full effects of Hurricane Irma around 2 p.m. on Monday. The projected center line of the storm runs just miles away from Valdosta State University and Moody Air Force Base.

Today Lowndes County was placed under a State of Emergency by Gov. Nathan Deal. Due to this Lowndes County residents who live in a mobile home or an RV are being asked to evacuate. Interstate 75 may soon be subject to contraflow lane reversal. If this does happen the northbound and southbound lanes will both be used as northbound lanes. This is a standard evacuation procedure and will allow those under mandatory evacuation in parts of Florida to evacuate quicker.

The strength of the hurricane could change drastically and place Valdosta in the center of a very powerful storm.

The current predictions still have the center of the storm traveling through Lowndes County near the city of Valdosta as well as through Echols County, Berrien County and Lanier County. Lowndes County and surrounding counties that are under a State of Emergency in Georgia are in bold below. A list of all 94 counties under a State of Emergency is provided below.

The hurricane is slowing down and thus is still currently located in the ocean between Florida and Cuba and continues to grow stronger as it travels in the direction of the continental United States. Predictions currently suggest that the eye of the hurricane is growing stronger as it moves over the water. Due to the size of Hurricane Irma, it is possible that while it’s moving over Florida it will struggle to lose strength because of the heat from the Atlantic Ocean and the Gulf of Mexico. The water on the eastern and western sides of the storm will also keep it from shrinking.

The eastern side of a hurricane tends to feature the most instances of tornadoes. Please be aware of this as you are looking at the forecasted tracks.

Valdosta State University still lies directly in the predicted path of Hurricane Irma and could suffer from 40-80 mph winds on Monday as early as noon. Plan for inclement weather for the majority of Monday.

If you are a student remaining on campus during Hurricane Irma please stay informed on precautions and safety guidance before, during and after the storm. RA’s in each dorm hall will be providing information to keep those staying on campus safe. All students that live on VSU campus must complete the Hurricane Housing survey.

For those who are off campus and are in or around the projected path of the hurricane, prepare your supplies before Monday. The hurricane is expected to begin impacting the Lowndes County area Monday morning at 10 a.m. Tropical Storm force winds are expected in Valdosta and the surrounding areas during the first interaction with Hurricane Irma.

Make sure that your household has a plan for when disaster strikes if you are not evacuating ahead of time. This includes, but is not limited to, placing any stray items that are currently outside into your home or garage, clear off any front or back porches such as chairs and tables, and, if possible, park your cars inside of a garage or under a stable covering. Winds are expected to be the most extreme part of our interactions with Hurricane Irma, so treat this storm as you would treat a tornado watch/warning. Today is the last full day to safely prepare for the upcoming weather.

The National Weather Service advises you stay in a room that is centralized in your home and that has no windows, on the lowest level of the house, if possible. This is the safest location to be in during times of severe winds. Fill bottles with water in the event that water treatment facilities become inoperable and keep shelf-stable foods near in the event that power is shut off and you are not able to cook or use your fridge. If power does shut off, try to keep your fridge door shut, as this will help to preserve the food that is inside and will keep the cold in for as long as possible. A battery operated emergency radio can be useful too if the power is not working.

Stay safe and try to keep your phones charged going into the storm just in case the power is out for an extended amount of time.

The Spectator will continue to relay all information that is provided by the National Weather Service and local authorities regarding Hurricane Irma.

Follow us on social media for more updates on Hurricane Irma. 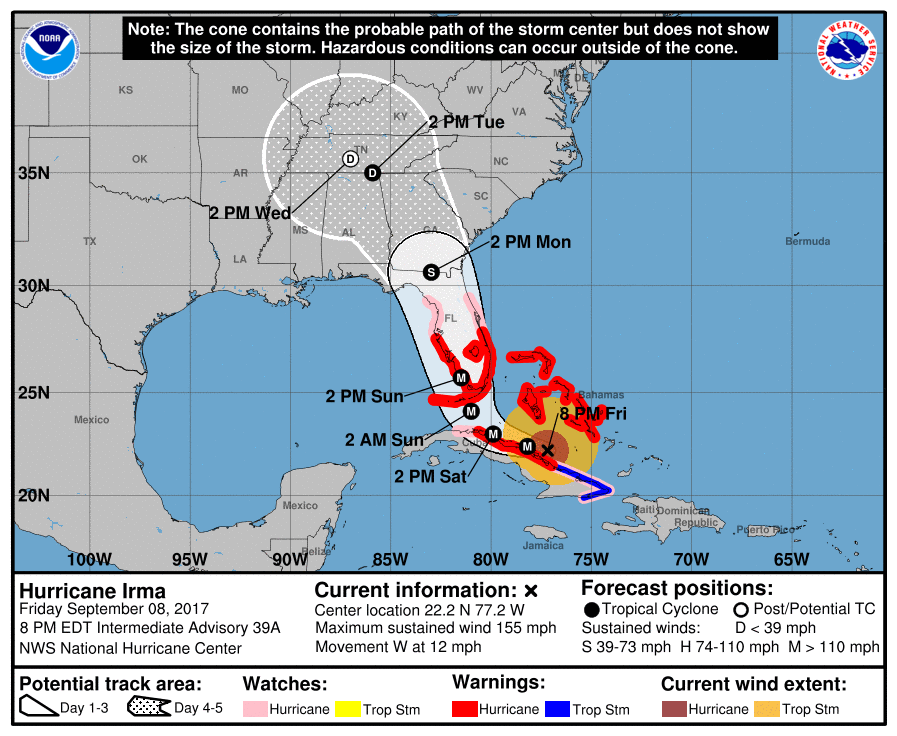 Story by Seth Willard. Photos by the National Weather Service.