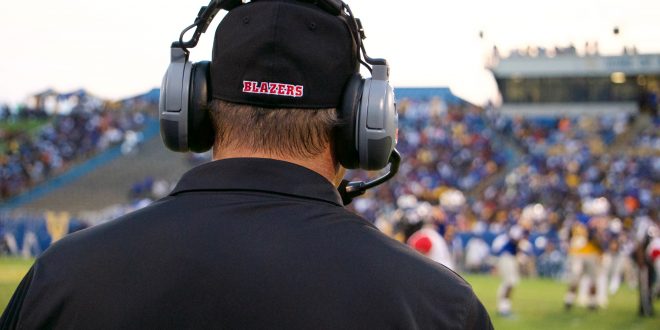 It has been two weeks since Kerwin Bell accepted the offensive coordinator job at USF and left an uncertain future for the Blazers in the process.

After a surprise bye week, the Blazer’s next game will be featured on ESPN3 when they host No. 10 North Alabama for the GSC Game of the Week.

The dangers of Hurricane Irma voided the Blazers matchup against Fort Valley State last week prohibiting the Blazers from an opportunity to make additional improvements and get their first win before entering their first conference matchup.

With the game being non-conference and the schedules of the two teams not matching up, there are no plans of rescheduling the game.

The Blazers were however afforded an additional week for preparation against UNA.

“This has been sort of a weird start to the year,” Kerwin Bell, head coach, said. “We didn’t play as well as we wanted to in the first game, and the game last week was a game we really needed.”

Freshman quarterback Rogan Wells was set to make his starting debut against Fort Valley. Bell is still sticking with Wells to make his debut on the televised home opener against rival, North Alabama.

“Rogan is doing really well, I think he feels very comfortable in what we’re doing,” Bell said. “He’s got a level head and I think our guys believe in him. I think he’ll do extremely well.”

The game will be in the freshman’s hands this weekend. His performance on the big stage can determine the course of the rest of the season for himself and his team.

The matchup between the Blazers and Lions is a highly-anticipated Gulf South Conference rivalry. UNA was one of the three teams to beat the Blazers during their 2016 season in a 44-19 blowout.

However, this game may mark the end of the GSC rivalry as the UNA football program will be moving onto the Division 1 ranks in the Big South Conference next season,

This will be their 42nd all-time meeting, UNA has won four out of the last five meetings with VSU. The Blazers haven’t beaten the Lions at home since the 2007 season.

The Lions second game was cancelled due to the hurricane as well, but they still managed to move up one spot in the AFCA poll. UNA is ranked tenth in the nation with a record of 0-1. Their one loss came to the third ranked Texas A&M Commerce.

UNA lost 8-7 but displayed how difficult it is to score on their defense. The Lions did not allow a single touchdown and forced three interceptions against the third ranked team in the nation.

Both teams are seeking their first win of the season, but this conference game weighs heavily on the Blazers season. Defeating the tenth ranked team in the nation would launch the Blazers back into the top-25 nation and secure a higher conference rank.

The game will be held at Bazemore-Hyder Stadium on Saturday at 7 p.m. and broadcasted on ESPN3. VSU students can get in free by presenting a valid VSU ID.