Home / Entertainment / Review: ‘I and You’ an emotional ride 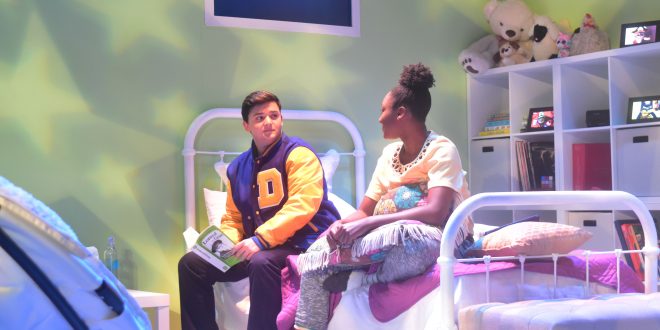 Review: ‘I and You’ an emotional ride

VSU performed the play I and You by Lauren Gunderson on Sept. 14 at 7:30 p.m. The play starred Daniel Lennox, Jr. and Mahogany Wesley as the main characters Anthony and Caroline. These two teens are brought together by an American Literature assignment and form an unlikely bond with one another. The show is carried by setting, performance, costume, music and comedy.

The play was performed in VSU’s Lab theatre in the Fine Arts building, which can only seat a small audience and the surface-level set. This made the audience feel as though they were receiving a personal show and it felt more intimate.

The entire play takes place in Caroline’s bedroom because she is too sick to leave her home. The setting is simple and is constructed up of a bed, a bookshelf, a desk and chair, and a couple nightstands. The vibrant green of the wall made the room feel alive in contrast to what Caroline felt.

The costume was interesting and went slightly against the personalities of the characters. Caroline was dressed in house shoes, mix-match socks, sweats, and a frumpy sweater and shirt. Her outfit was outlandish and creative, which she is, but she is also troubled. Anthony’s costume was simple and only consisted of converse, jeans, and a letterman jacket. This contradicts Anthony’s character because he is actually complex and deeper than what most “jocks” are meant to be.

There isn’t a lot of music within the play. The song Crazy in Love by Beyonce played as an opening song and they played instrumentals between scene changes. The opening song gave the audience a taste of what was to come later in the story. Clearly the play is a romantic comedy, and the opener shows the audience just that.

There was nonstop laughter throughout this duo performance. The audience loved the wittiness of the characters and the connection they built between each other. The interactions were hilarious, sweet, and also heartbreaking. This play was meant to tug on emotions – meant to bring out joy and sorrow – and it did just that.

I was touched by the play and it is personally, my favorite performance I’ve seen at VSU. I recommend that everyone go see this play if rom-com is a genre you like. The Valdosta State Theatre and Dance will be performing I and You on September 15-20 at 7:30 p.m. with the exception of September 17, which will show at 3 p.m.