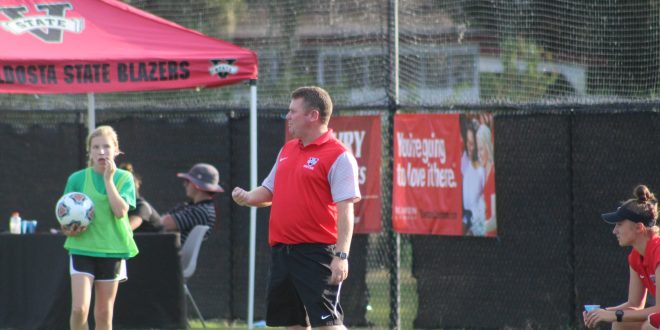 They aren’t perfect, but they’re about as close as you can get.

Against UAH, the Blazers never found their footing. They fell behind in the eighth minute of the match and the Chargers found cushion room when they netted their second goal six minutes into the second half. The Blazers could not score a goal and lost the contest 2-0.

That road loss would not define the Blazers trip and after Sunday’s contest, they are established as a threat in the Gulf South Conference.

Sunday afternoon the Blazers played against UWA. The Blazers were trailing 3-1 in the 71st minute, when freshman forward, Haille Paterson, scored her first collegiate goal. This brought the game to a single goal deficit with under 30 minutes remaining in the match.

The freshman didn’t have to wait long for her second goal, scoring just minutes later to bring the game level. From that point the Blazers had the momentum and in extra time, Ashley Lewis scored a header that sealed the game for VSU. The win put VSU at 2-1 in the conference as opposed to 1-2 which could make a difference in the long run.

“I feel there is a lot more confidence in the team this year compared to last year,” head coach Stephen Andrew said. “There are no easy games, so we don’t show up thinking we have a definite win.”

The Blazers will host two games in conference play at the Soccer Complex this weekend.

On Friday, September 22 at 7 p.m., the team with play against Delta State. Following the game Friday, the team will play Mississippi College on Sunday.

These games will set up one of the biggest matches on the Blazer’s calendars, against West Florida a week from Sunday on October 1.

Previous What’s Your Take: Should walk-on athletes receive stipends
Next Wells out, Robles in: Football searching for first win of the season