Home / Sports / Wells out, Robles in: Football searching for first win of the season 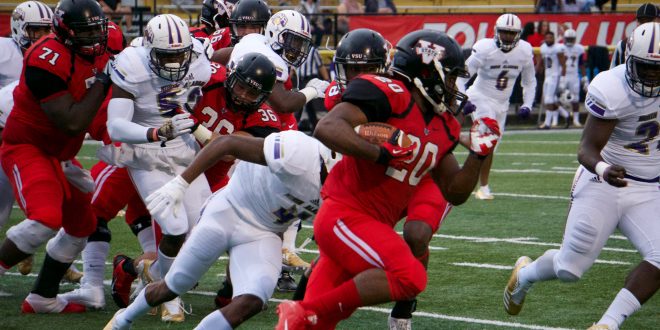 Jordan Germany is second in rushing yards for the Blazers. They'll need the ground attack against West Florida with Rogan Wells sidelined with injury this week.

Wells out, Robles in: Football searching for first win of the season

The Blazers will be heading to Pensacola, Florida on Saturday, not in search of the beach but their first win instead.

The Blazers fell to 0-2 on the season last week after the 30-24 loss against our GSC rival, North Alabama. Valdosta’s starting quarterback Rogan Wells was forced out of the game early due to a left shoulder injury.

The injury will keep Wells sidelined against West Florida, but he shouldn’t be out for too long, according to head coach Kerwin Bell. The Blazers will be on a bye week after the game.

Adam Robles will take on the starting quarterback role for the Blazers against West Florida in place of Wells. Robles has experience against the Argonauts, throwing for 108 yards and a touchdown against them last season when the Blazers won 40-28. Freshman Max Hughes will serve as the backup for Robles.

Despite falling short of a win, the Blazers showcased that their defense can still have an effect on the end result of the game. The Black Swarm forced multiple turnovers and kept the Blazers in the game against the No. 10 team. Anchored by defensive back Brandon Roe and linebacker Sharmaine Washington, the defense is continuing to improve.

“For us we have to make sure we go into this with the same attitude we had last week, and it’s sort of a backs against the wall mentality,” Bell said. “I ask for great passion and grit. That’s what I want to see out of this football team. I know we’re a lot closer football team than we were three weeks ago, so now we can find a way to improve and find a way to make the playoffs.”

The Argonauts are 2-0 this season and will play the Blazers as their first conference matchup. West Florida won their last game 51-23 against Chowan. The Blazers could use this game to gain some momentum before entering their bye week.

West Florida is last in total yards and the worst rushing team in the GSC, while Valdosta has only allowed the second most yards in GSC.

If the Blazers can limit their turnovers and penalties, they should have an advantage. Over the last two games, the Blazers averaged 116 penalty yards against them per game and have given away seven total turnovers.

In the past 15 years, the Blazers haven’t started off a season 0-3. Their season wasn’t predicted to look like this in any way, as they were the favorites to be the second seed in the GSC.

The game is Saturday at 7 p.m. and will be held in Pensacola.