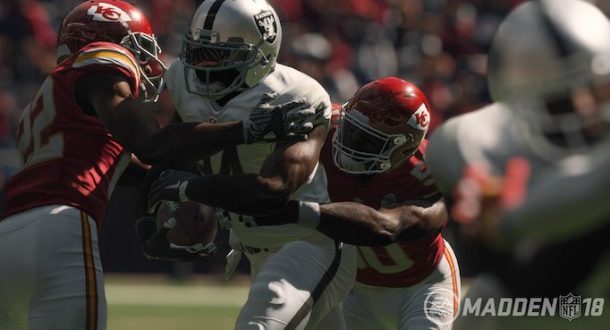 The latest installment for sports gaming has touched down in stores and later, consoles everywhere. As of August 25th, EA Sports released Madden NFL 18. This new game is comprised of many groundbreaking features, with the most notable being it’s new Frostbite engine.

The engine intensifies the visuals and gives the user the feel of on-field play. From new voice audibles to impactful bone-crushing effects, EA Sports has shown the gaming community that they’ve developed the “clutch” gene. Gamers all over the world have long awaited the championship-caliber modifications.

According to Ebenezer Samuel, writer for the New York Daily News and video game critic, Madden NFL 18 is simply, “The best all-around football video game ever.” he also states, “The visuals and gameplay both see incremental improvements to their finest levels ever.”

What can make a football game greater than its previous editions? Easy, just place Tom Brady on the cover. EA Sports announced the five-time Super Bowl champion of the New England Patriots as the cover athlete on May 9. Brady follows in the footsteps of teammate Rob Gronkowski, the man on the cover of last year’s edition.

This marks the first time Madden’s history that teammates have graced the cover in back-to-back years. Dan Hanzus, Writer for NFL.com, avows that Brady is “the oldest guy to grace the cover since John Madden from 1988 through 2000.”

Madden NFL 18 has also introduced its first series in to story mode called “Longshot.” This story is about a by-chance athlete, Devin Wade, who charts an uncommon path to the NFL, via reality show, years after leaving an illustrious Texas Longhorns program. In the hands of the dynamic Frostbite engine, Wade and other characters come to plausible life.

Frustrations also have arisen with Madden NFL 18 lately. Running through the line of scrimmage post-snap has never felt so unnatural, as both offensive and defensive lineman glitch around and sometimes teleport. It’s evident that Madden has issues overcoming this obstacle. Perhaps, whenever it is solved, EA can implement a patch to reverse the wrongs it has made.

“Fans seemed to be impressed with Longshot…but they were also frustrated that some of the existing issues with franchise mode and commentary were not addressed” Michelle Bruton of Bleacher Report, said. Though Madden NFL 18 earned a critic score of 83 out of 100 by Metacritic, users showed no remorse coming in with a score of 7.3 out of 10.

Previous Wells out, Robles in: Football searching for first win of the season
Next Dr. Greg Erickson presents Complex Dental Structure and Biomechanics in Non-Avian Dinosaurs