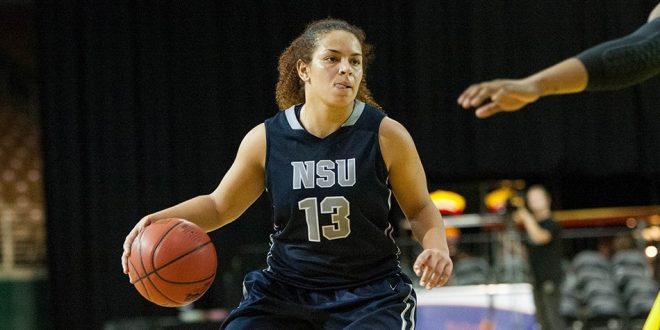 Taylor Buie is a sixth year player from Puyallup, Washington. After multiple injuries interrupted her playing career at Nova Southeastern, her goal is to help lead VSU to a championship this season.

When Taylor Buie was just learning about sports, her brother, who wanted to be Michael Jordan, introduced her to the game of basketball. Now, years later, Buie will finish a successful college basketball career with the VSU Blazers, chasing one last shot at a national title.

Buie, a 5’5’’ guard who grew up in Puyallup, Washington, a town 35 miles outside of Seattle, joined the Blazers after a stellar career at Nova Southeastern University in Broward County, Florida.

“I started playing basketball with my older brother,” she said. “My brother wanted to practice every day to be like Jordan, so I practiced with him.”

Buie joins an already formidable squad that is coming off a season that featured its first conference championship in 20 years and goes into this season ranked eighth nationally.

Buie played other sports back in high school, including softball. But she was partial to bowling, and said that if it didn’t interfere with basketball season, she would have played that too.

“My high school bowling team was four-time state champs,” Buie said. “I wasn’t four-time state-champ good, but I would have loved to play. I would love to join a bowling league soon.”

“I was first team all-conference in softball,” she said. “I was competitive playing softball, but it’s not like basketball. Basketball is more fast-paced, up and down. Softball can be a really slow game.”

Buie’s style features a variety of shots from the perimeter. In her 2013-2014 season at Nova, she was eighth in the country in 3-point shooting percentage and 15th in 3-point baskets per game.

“My favorite player in the NBA is Klay Thompson,” Buie said. “We both have quick shots, and I play more of a catch and shoot type of game.”

This will be Buie’s sixth year playing college basketball. During her years at Nova, she racked up a closet full of awards, including South Region Tournament Most Outstanding Player in 2014, the same year she led the Sharks to the Final Four. They eventually lost to West Texas A&M in the semifinals.

In her senior year at Nova, Buie suffered a foot injury that cut her season to four games. Now, she starts her final year of eligibility in Valdosta.

“She is an experienced player, who brings a lot of knowledge and some leadership,” VSU Head Coach Carley Kuhns said. “With a lot of new people and somewhat of a young team, Taylor knows how to play at that highest level, and she wants a championship, so her presence is going to be beneficial.”

The transition from Nova to Valdosta has been welcoming.

“I love my teammates,” Buie said. “I just came in and I felt like we clicked immediately, meshing together earlier is going to set us up for success later and that’s what we want to do.”

Kuhns likes how Buie is fitting in.

“The chemistry on the court is great with the addition of Taylor,” she said. “We preach good chemistry, and chemistry is what takes good teams to great teams.”

This year the Blazers are heading to Buie’s home state of Washington for a tournament during Thanksgiving.

“I’m excited to play in front of my family and friends that are coming to the game,” she said. “It’s basically going to be a home game for me,” she said.

Buie is glad to be healthy and excited to get back on the court.

“This is the comeback year and the plan is to win a championship,” she said. “This is my last hoorah. I thought I was never going to play basketball ever again. I’m getting a second chance and taking advantage of this opportunity. I see how hard we are working. After all this work we will be where we want to be.”