Home / Campus Life / The man behind the crown 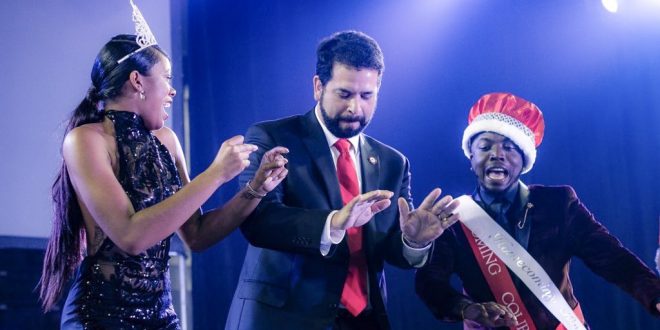 The man behind the crown

Michael Sanders is VSU’s new homecoming king who wants to use his new status to give back to the students who supported him during his campaign. He plans to inspire his peers to be as involved and outgoing as possible to reach their goals. 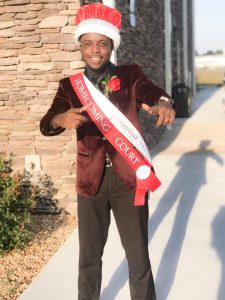 Originally from Atlanta, Georgia, Sanders is an active student at VSU. He is currently the vice president of Alpha Phi Alpha, a member of Media Arts Geniuses and the Membership Coordinator African Student Association. He also interns every summer at UCLA, where he mentors high school students that live all over the world.

Sanders is a senior public relations major who is graduating in May of 2018. He wants to integrate himself more into the entertainment industry and enhance his career in acting after he receives his diploma.

“I plan to continue working on my craft in acting,” he said. “I see myself being on TV and in movies.”

Sander’s hobbies include rapping, writing poetry and working on his acting skills. He would describe himself as ambitious, creative and selfless, which is probably why he was the best fit for homecoming king.

Sanders was inspired to run for homecoming king because of all the support he received from friends and family.

“My reason for running for king was fueled and ignited by all of the love and support that I get,” Sanders said. “I also wanted to inspire my peers to know that as long as we put our mind on a goal and work hard, success will be inevitable.”

When Sanders realized that he was campaigning for king, he knew right away that he needed to work hard to get as many people to vote for him.

“My strategy going into this I knew I had to use all of my creativeness and put it to use,” he said. “Being a PR major, I have been studying how to market myself and the best ways to reach campus effectively. My biggest strategy was to just be as transparent and genuine as possible.”

Sanders explained that he knew how important it was to just be himself. He also could not have accomplished his crown were it not for the help he had from his campaign manager.

“I knew that the moment I started acting like something I’m not, it would show,” he said. “My amazing campaign manager, Jasmin Martin, was my rock throughout this whole thing. She is probably one of the smartest and selfless person I’ve met, and I am forever thankful for her and my entire team.”

After Sanders realized he won homecoming king, he explained that the feeling didn’t hit him until long after the ceremony.

“When I won Homecoming King, it didn’t hit me until the next morning,” he said. “I just couldn’t believe that this actually happened.”

Although, Sanders always knew that the important part was not winning the crown, but reaching out and impacting the student body with his positive attitude.

“Going into this, I didn’t even want to think about if I’d win or lose,” Sanders said. “I knew that as long as I can reach my peers positively, winning or losing wouldn’t change the impact that I would have made.”

Now, Sanders wants to contribute as much as possible to get students more invested in supporting VSU, and the fun events they host each year for homecoming.

“I plan to enhance the school spirt that students have now,” Sanders said. “I want everyone to be proud to be a blazer. Jayla and I are actually starting a scholarship that we will grant next semester to students. I’m so excited to give back and make a difference in the VSU community.”

His advice for other students who wish to be more involved and accomplish their goals is to be a force of nature that will not back down from any obstacles.

“Never let anyone dictate what you want to do,” he said. “There was people praying that I would crack under pressure, but through prayer I knew that whatever God has for me is for me and nothing will change that. So to anyone out there that has a goal, I want you to have tunnel vision and never let any roadblock stop you.”

Previous Our point of view: Movies to get in the holiday spirit
Next Freidhoff stresses student success through advising

People Poll: Do you think VSU should have started the semester face-to-face?

Ian Penix, junior biology major “No, because of the way that the U.S.A. is handling ...