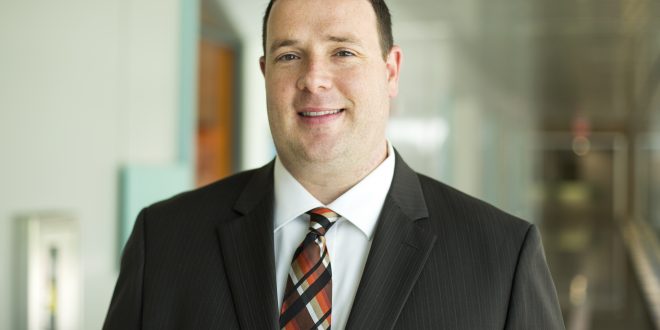 Coming in with over a decade of experience, Robert Freidhoff arrives at VSU as its new executive director of advising with plans of focusing and making sure students are prepared for their after-college careers.

He currently has 15 years of advising experience under his belt, starting off as a premed advisor at GVSU while enrolled as a student. Freidhoff graduated from GVSU in 2002 with a bachelor’s degree in health science and again in 2005 with a master’s degree in education, focusing on adult and higher education. Both times he graduated with honors.

When he graduated with his health science degree, he was quickly hired by GVSU to become the Program Coordinator in the SMART Center, an advising center that later merged with two other advising centers to become the CLAS Academic Advising Center in the summer of 2008.

“My first day on campus as a freshman I was hired into the university advising center,” Freidhoff said. “Little did I know how fortuitous that would actually be in my career. I worked four years as a student worker in the University Advising Center at Grand Valley, and the person I was working for during those four years actually gave me the opportunity to start out as a premed advisor right after I graduated. So, I got an early jump into this field.”

From 2002 to 2008 Freidhoff worked his way up, and then in 2009 he became the senior academic advisor for the College of Liberal Arts and Sciences. From 2009 to 2013 he worked at GVSU as the director of the Padnos College of Engineering & Computing Advising Center.

He then went on to the University of Michigan from 2013 up until recently to work as the director of Engineering Advising Center. During this time, he also worked with the Appreciative Advising National Team which allowed him to interact with and consult with many advising center directors, deans and vice provosts around the world.

This opened a door for him to experience the different ways each leader chose to work towards increasing student retention, persistence and graduation that included the creation of new policies, advising structures, faculty and staff development, physical spaces, data implementation and utilization.

His 15 years of working in advising involved figuring out how academic advising impacts the success of students as well as how do they help students navigate college and how to do that effectively.

Freidhoff saw that a spot had opened up for Executive Director of Advising here at VSU and looked into it. He was familiar with VSU from being a student at GVSU when both schools played in a couple of national championship football games.

“They really stressed the importance that academic advising has the overall success of students,” Freidhoff said. “I got a really good opportunity to meet and interact with quite a few people in part of the search process, and I am really impressed with the leadership on campus and the direction that it is moving and the focus in student success overall.”

Freidhoff stresses how important student success is to him and really focuses his goals for the future of his career here on making students’ college career clear to them.

“For me, my goal is really learning what is working and making sure that, as a student, it is very clear what is expected of you regardless of whether you are in arts or sciences,” Freidhoff said. “We want to make sure that when a student gets to VSU, and they look at a map or a plan that they know exactly what they should take and when they should be taking it. I also what to make sure that we can have conversations with our students that lets both the advisor and student know what they want out of their four years at VSU and that they always get their answers.”

He said he is excited to work at VSU and to get to know the staff and students.

“I love what I do, and I love the opportunity to work with students,” Freidhoff said. “It’s so fun to hear what students want to accomplish and to be able to play a little bit of a role in helping them to get to where it is they want to go.”