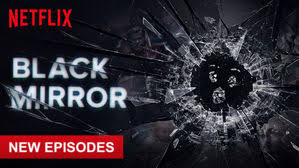 Season four of Netflix’s “Black Mirror” recently debuted on Dec. 29. “Black Mirror” is a science-fiction/anthology series that focuses on modern society and the consequences of advances in the modern society. The show was originally created by Charlie Brooker and premiered on British television in December of 2011. The TV show was then bought by Netflix in September of 2015. Season four has six episodes, averaging at about an hour run time per episode. Each episode gives viewers a chill down their spine and can make one think twice about advancing technology in our world. Below is how I would rank each episode from season four.

6. “Crocodile”– This episode starts off with a bang and leaves you wondering how Mia Nolan will handle the guilt she feels from assisting in covering up a hit-and-run from three years ago. The episode follows Nolan around after the hit-and-run, and in my opinion, is a very predicable episode. While the overall plot line of “Crocodile” was very generic, the sub-plot lines and various factors that lead to Nolan getting caught at the end make it still worth watching.

5. “Metalhead”– This is the shortest episode of “Black Mirror” to date at around 40 minutes. “Metalhead” is a post-apocalyptical battle between a woman and a robotic dog like machine. “Metalhead” is presented as a black and white episode that focuses on keeping you on edge as you watch actress Maxine Peake being forced to outwit the robotic dog to stay alive. The short run-time of the episode is appealing but left me wishing for a deeper plot line. Critics at The Independent said there are details to hint at a wider story and highlight the bravery of Peake’s character while simultaneously enhancing the notion that, away from this hunt between Peake and the robotic dog, hundreds of other people are becoming prey to these robotic dogs. “Metalhead” was very visually pleasing but lacked a deeper plot line to make the episode memorable.

4. “ArkAngel”– This was the most bone-chilling episode to me because as humans we are so close to having the same type of technology as they do in the episode. “ArkAngel” has a straight forward plot. An implant can be installed in a child to allow the parents to know their GPS location, see what they see and even be able to sensor their vision from things that can be potentially traumatizing all through a tablet the parent receives from the company. As expected, the mother (Marie) becomes obsessed with keeping track of her daughter (Sara) after getting the ArkAngel implant to keep her safe.

Throughout the episode you follow Sara growing from a young child into a rebellious teenager. As expected Marie cannot give up the ArkAngel, causing Sara to rebel against her and beat Marie up with the ArkAngel tablet device. While the plotline itself is predicable, the cinematography and the acting is well done. ArkAngel leaves one with the thought of “why would anyone be this over-protective of their child?” The dark reality of ArkAngel is that with all of the parental blocks and technology that is being developed, it can be easy to obsess and want to protect your child from all of the evils in the world.

3. “Black Museum” —This episode has a well written plotline that starts off with a British traveler named Nish who stops at a gas station to charge her electric car’s battery for a couple hours. She enters a place called the Black Museum where viewers get to see the rise and fall of three advancements in technology that have gone wrong. First, we get a taste of what the world would be like if doctors could feel a patient’s pain by having the doctor and patient where a special hair net like machine. Since this is “Black Mirror,” you can assume how this new technology works out…not well.

Up next is a toy monkey in a glass display case which contains a digital copy of a woman inside. Originally the woman was in a coma and placed inside of her boyfriend’s head so that she could still be with her family. The digital copy could feel emotions and acted as if it was alive. Eventually, the boyfriend got tired of her in his head and got her transported to a toy monkey where her copy was to be imprisoned forever. The only ways she can communicate with the outside world are two pre-recorded sayings on the doll, “Monkey loves you” and “Monkey needs a hug.”

The last technology that you get to see in “Black Museum” is a digital copy of a death row inmate that paying customers can electrocute as much as they please for a small price. Included in this purchase was a customized keychain that features the inmate screaming from the chair. “Black Museum” contains more than just horrific technologies gone wrong though, the episode keeps its viewers on edge and has an unexpected twist that “Black Mirror” views have come to expect from the show.

2.”Hang The DJ”– This episode features a tinder-esque dating system that matches you with potential mates. Dates involve living with the person that the system matches you with for a certain amount of time. The protagonists of the episode, Amy and Frank, are matched and have only about a day with each other. They enjoy their date and are told by the system that they are not matches for each other. Amy and Frank continue to listen to the system and go through various dates and relationships with different people for various amounts of time. Some matches are for just a few hours while others are over a year.

“Hang The DJ” is an episode with a happy ending that most “Black Mirror” viewers do not expect. Amy and Frank go through struggles as they go through partner after partner, but when they get matched with each other for the second time, the episode shows that love always finds a way. “Hang The DJ” gives viewers a glimpse of a futuristic dating scene that we can already see today in apps such as Tinder or Bumble.

1. “USS Callister” – This episode was one that I thought would be cheesy and overdone. I was pleasantly surprised by the amount of depth that was in the episode’s plotline.  “USS Callister” is an homage to Star Trek fans while still appealing to those who are not into the series. Robert Daley is the captain of the USS Callister, which is a space ship in Daley’s favorite series: Space Fleet.

“USS Callister” takes place in both the virtual world that Daley has created on an online gaming platform known as Infinity. This form of virtual reality is much more advanced than the VR systems that you would see in stores today. When in Infinity your body is in a coma like state while you are transported into the game. All of the characters in the USS Callister have been cloned into Daley’s modified version of Infinity which is on the USS Callister. The characters that have been cloned onto the ship are Daley’s co-workers and colleagues that have done something to upset Daley. The USS Callister is a place that Daley can take his aggression and feelings out on virtual clones of his colleagues. The clones in the game are similar to those in “Black Museum” that can feel pain and are aware of their surroundings. The episode takes you from Daley’s ship in the game to his everyday life working at the Infinity headquarters.

“USS Callister” is a visually striking episode that focuses both on reality and the virtual world and how people act where they are comfortable versus where they are not. You can see Daley’s struggle in his daily life, how he takes this aggression out on the clones and how the clones are capable of thought and make attempts to escape the USS Callister. The episode keeps you on your seat wondering if the Space Fleet crew will escape the evil captain Daley or if they will forever be his slaves.

Previous Baseball is on deck
Next Panic in paradise: Human error sends Hawaii into terror

Here for a good time, not a long time: Where’s the best place to go for spring break?

People Poll: What are the best bars/clubs in or near Remerton?

Hey guys, and welcome to another edition of Pop Addict. As always, I am excited ...