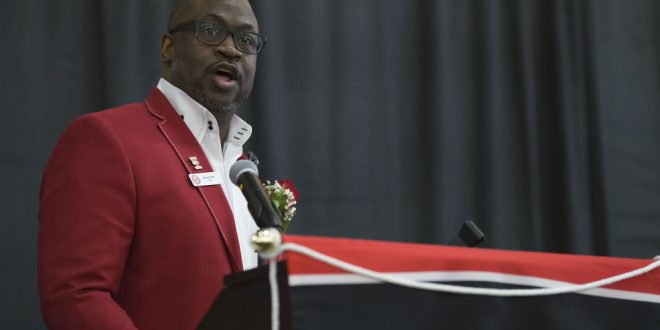 Ramon Allen is the fourth all time leading rusher in Valdosta State Football history and one of the newest members to the Athletic Hall of Fame.

Every student athlete hopes to one day have their name in their institution’s Hall of Fame.

For Ramon Allen, a “ground and pound” running back for the Blazers in the late ’80s and early ’90s, that dream came true when he was inducted this past weekend along with a number of other VSU greats.

Allen reflected on the feeling of having his name mentioned as one of the best athletes VSU has ever had.

“This moment is just incredible,” Allen said. “It’s for a lifetime.”

Allen learned of the honor when a former teammate shared the news on Facebook, according to the Valdosta Daily Times. At first, Allen thought it was a joke.

Standing at 6 feet 1 inch, Allen was a bruiser on the field during his time at VSU, and his numbers throughout his tenure show it.

Allen was born on Sept. 23, 1968, and attended LaGrange High School in Troup County, about 60 miles southwest of Atlanta. At the recent induction HOF induction ceremony, Allen attributed much of his success to tutelage from LaGrange Head Coach Gary Guthrie, who was a big influence on him.

After high school, Allen came south to Valdosta. His freshman year was a success, as he rushed for 780 yards with six touchdowns. At the end of the season, Allen brought home the Gulf South Conference Freshman of the Year award.

After just one year, he made his presence known on the field. Allen did not lose a step during his sophomore year, as he scored three touchdowns and pilled up 846 rushing yards.

Junior year was by far is best as a Blazer, statistically. Allen ran for a school record of 957 yards and scored 12 rushing touchdowns. He then set another record during the season with a 199-yard, four-touchdown performance at University of Tennessee-Martin.

The next week, Allen put on display a 192-yard effort against Jacksonville State. Those performances were just two of his four 100-plus yard games for that season. He had a total of 12 such games going into his final season.

Allen only amassed 488 rushing yards as a senior, but he was already one of the premier running backs in the GSC. Allen left VSU without a ring, but he left a legacy.

In his four years, he ran for 3,071 yards, which ranks as the fourth-most ever during the career of a VSU running back.

On the academic side, Allen majored in speech communications. Although his time here was years ago, he is still an active face on campus.

“I usually come back for homecoming every year,” Allen said. “I have seen a lot of growth in the university.”

Allen left the event with high remarks for his alma mater.

“Valdosta State is back on the map,” Allen said.