For some students, getting accepted into college is the achievement of a lifetime. But, for some prospective VSU students, this lifetime achievement lasted only one day.

On Jan. 23, an automated email was sent from the VSU Admissions Department to prospective students and students who did not apply to VSU congratulating them on their acceptance to VSU.

“On Tuesday morning, our customer relationship management system sent out an erroneous email to a number of students regarding our Facebook communities,” Ryan Hogan, Director of Admissions, said. “The reason why this happened is still being determined, but we have worked with our Information Technology department to put workflow measures in place that will prevent this from happening again.”

Hogan said the number of students affected by this message is unclear at this time.

“However, for safe measure, on Tuesday we sent out an email to all students that could have been potentially affected,” Hogan said. “With the aid of the Solution Center, my department has followed up personally with everyone who has submitted a call or email regarding this.”

The rejection email said, “An email meant for students who have applied and been accepted was sent to a significantly larger population than intended. We are so sorry for this mix up and are doing everything we can to fix it.” 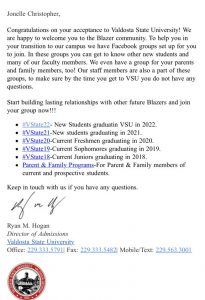 The email left some affected students with confusion and heartbreak.

Jennifer Hall, an 18-year-old Ware County High School student, applied to VSU in August 2017 and received an accidental acceptance letter. She then received an email from the VSU admissions staff stating that her application was deferred because of her test scores.

“I was very excited about it,” Hall said. “VSU is where I want to go and I had issues regarding them getting all my transcripts and application into them because they said it was put in the miscellaneous file, so I thought that everything had worked itself out and I was able to get in to VSU. Then I got the email that it was a mistake that the email was never supposed to go out, I was really heartbroken and upset.”

Hall called the admissions office, where a staff member informed her it was not their fault the email was sent out and she did not get accepted into VSU.

“I’ve never applied or even thought about applying to Valdosta State being that I grew up around the corner from the school,” Christopher said. “Valdosta State is a great school but this was a terrible mistake and I know some friends who were very excited about this email.”

Christopher responded to the email explaining that she did not apply to VSU and wanted to know about the confusion. She then received a personal email from Ellida Welsh informing her there was a glitch in one of the VSU University of Admissions systems. 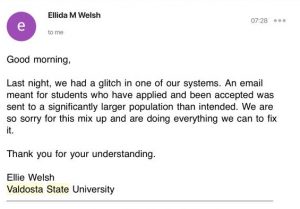 “Systems like the one we use are implemented to allow us to automate some processes and communication to students that fit certain criteria and need specific messages,” Hogan said. “By automating some processes, it allows our team in the Admissions office more opportunities to connect with our prospective students on an individual basis.”

“I was very confused because I haven’t applied,” Huff said. “But I was excited.”

The email also reached students in other states who were already in their first year of college.

“I didn’t apply to VSU, but I had thought about it last year when first applying to college,” Taylor King, a 19-year-old University of Central Missouri student, said. “I mean for me it wasn’t a big deal because I am already in my freshman year of college at the University of Central Missouri, but I had been interested in going last year when I was in high school. Now if I was actually interested in transferring there this coming year, it would have sucked and it probably would have made me very upset.” 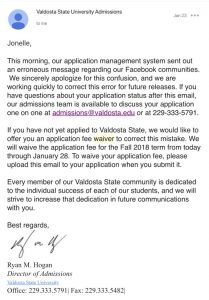 In the apology email, Hogan said that the Admissions Department would like to offer an application fee waiver to correct the mistake. To waive the application fee, the students have to upload the email with their application before Jan. 28.

“We were excited to learn in recent days just how eager these students are to join the Valdosta State community,” Hogan said.