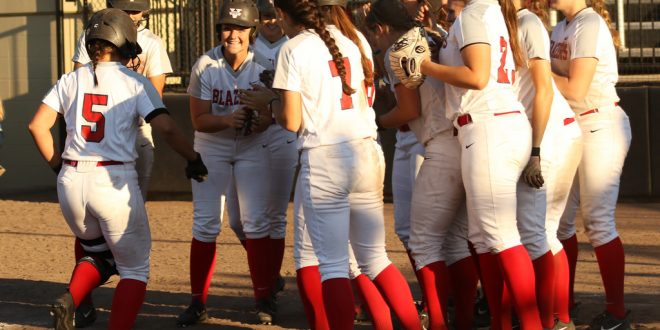 Softball was selected to finish No. 2 in the Gulf South Conference.

Softball set to ‘tee’ off season

Softball season is striding to the plate, and the Lady Blazers are strapping up their cleats for a chance to win championships.

Since the start of the semester, the team will be laying down the foundation for their road to the conference and national titles. The team finished fourth in the Gulf South Conference standings last season with a 39-19 overall record. The Blazers’ record was 20-4 at home while their away record was 9-11.

Last year, the team’s season was ended by the runner up of the conference tournament, the University of Alabama-Huntsville, in the semifinals.

In the 2017 season, this team led their conference in every single major offensive category except on-base percentage and walks, where they were second in both.

It’s astronomical how well the team hit last season, but it is a new season. All that matters is if those stat lines can be repeated or improved upon. The good news is that the Blazers have many of their players returning, so barring injuring, look for the balls jumping off their bats.

This off season the team is adding a few more arms to the rotation.

“I think our pitching staff is better this year,” Head Coach Thomas Macera said. “We have a larger pitching staff than last year, so we just have a few different options.”

Their pitching wasn’t as dominant as the team’s offense was, but their earned run average was in the middle of the pack at 3.40.

“I think we are going to have a successful season,” Jessica Mohl, a senior from West Palm Beach, FL, said. “We have a deeper team this year, and the pitching staff is a lot stronger mainly because there is more [pitchers]. We have six seniors returning, and our lineup is pretty deep.”

The story seemed to be that last season their pitching and defense held their opponents down, and the offense just piled on the runs in the game. The Blazers defense averaged three to four runs allowed a game to their offense’s accumulated six to seven runs per game.

The teams fielding was fairly good last season. Their fielding percentage was at .961, which was around the upper middle of the conference, but the opponents ahead of them were only higher than by hundredths of a percentage.

The GSC preseason came out Jan. 17, and the Lady Blazers were voted to finish the season second behind West Florida.

“The team is coming along, and everything takes time,” Macera said. “You don’t win championships in February. We aren’t panicking about how we are right now. We are just trying to playing together as a team.”