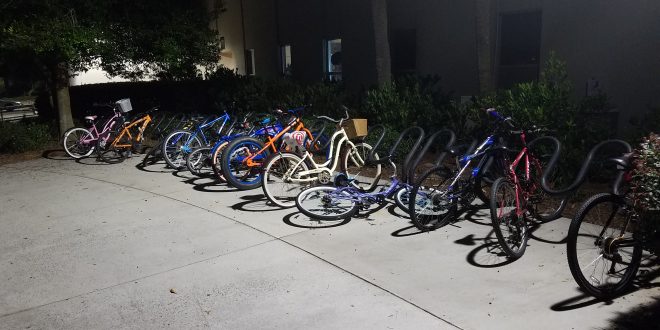 On Wednesday, Feb. 7, the VSU Police Department arrested a Valdosta man who stole two bikes on campus earlier this week.

Ralph Donaldson, 58, is facing multiple charges including two counts of possession of tools during a commission of a crime, two counts of theft by taking and one count for criminal trespass with unlawful purpose. The total amount of property stolen came to $320.

According to the police report, UPD observed a man dressed in a red baseball cap, a black and grey sweater, blue jeans and white shoes committing the crime on Sunday, Feb. 4, at 6:30 a.m. and 8:30 a.m. by Georgia Hall. He was also carrying red bolt-cutters.

Records Custodian Bill Postel said that the 6 a.m. shift UPD officers came in early on Wednesday in an attempt to catch the bicycle thief. In his report, Officer Jesus Arreola said that everyone had arrived at 5:30 and headed to different areas of main campus that have bicycle racks.

Arreola headed to the southern entrance of Langdale Residence Hall until he noticed a man who wore the same clothes as the thief from Sunday.

“I radioed my location to advise the squad and proceeded to turn around to make contact,” Arreola said in his report. “As I approached the subject, he appeared to be picking up his pace as if he was about to run.”

“Upon grabbing his arm area, I felt some sort of tool,” Arreola said in his report. “I asked him to pull his hands out of his jacket, and he refused.”

Being unsure if the tool was a gun, Arreola placed the man on a wall and removed his hand from his jacket, allowing the tool to fall. Arreola noticed that the tool was the same red bolt-cutters Sunday’s thief carried.

According to the report, Arreola said he asked the man’s name to which he stuttered Ralph Donaldson. Arreola then read him his Miranda rights.

Officer Rebecca Leatherberry arrived on the scene and transported Donaldson to Lowndes County Jail. The report said that if Donaldson is seen back on VSU’s campus, he will be arrested and charged accordingly.