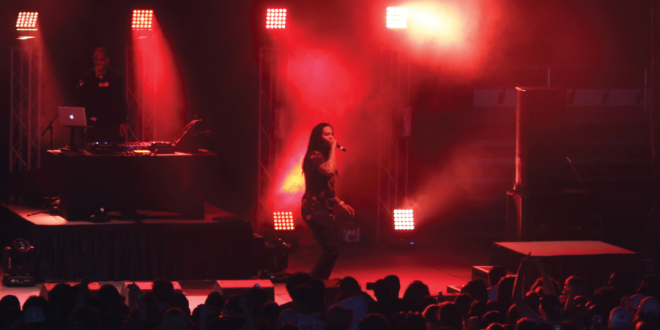 The Spectator: I know this is really weird, but I did not think you would be as tall as you were

Waka Flocka: Yeah, a lot of people be thinking that. It’s crazy

The Spectator: Have you been to Valdosta before?

Waka Flocka: Before I was famous. I went to Valdosta for spring breaks and shit like that.

The Spectator: So you just put out your first album in a while. What kind of inspired that?

Waka Flocka: Mixtapes and remastered. What inspired it is because people from this era never—I never ever streamed music ever, like in my whole entire career. Streaming is actually something new. Like Elvis Presley never streamed until they put him on stream, so it’s like this new generation doesn’t know exactly what Waka did, so when I put comments  up like “ Yo, Lil Pump’s like an albino Waka” (3:22) . They think I’m hatin. I’m flattered because that’s somebody that came from the birth of something that was created, because I want the voice of the youth to stand taller than the main stream of hip hop. So, just to see a Lil’ Pump—they say  Lil’ Pump is Chief Keef and Chief Keef is Waka Flocka—so just to see that shit go through generations, I was flattered. So to see headlines say, “Hey that was hatin” is wrong because I always talk from a flattering position. I’m just blessed. I’m just fuckin’ blessed.

The Spectator: How do you think people starting out now are different from when you started out?

Waka Flocka: The only difference is the new artists have more power than they had before. Before you would just, you was just confused–you never had examples. You never had a lot of artists that made mistakes that popped. Yeah, it wasn’t a lot of younger artists. Back in the days, the youngest artist was like 27, 32.

The Spectator: And now you have a lot more young people like teenagers.

The Spectator: What advice would you give young people right now trying to start out?

Waka Flocka: Don’t be afraid to make a mistake. That’s the most I can tell you because me trying to give you advice, it’s going to be past a new persons education. You won’t even be able to fathom it. It’s impossible for you to learn music business in your first week of rapping or first year. It’s fucking impossible.

The Spectator: So it takes a while?

Waka Flocka: Oh yeah. It takes education. Education is the mistakes and efforts.

The Spectator: How long did it take you?

Waka Flocka: About 10 years in music. Literally, because music changes. My whole course of being in music, I came from CD era. I came from CD era to ringtones to CDs, from CDs to downloads, from downloads and now I’m in streaming. I came from four different phases of music. People compare me to people from streaming. I came from CDs. How the fuck are you still talking about me in streaming? So just to hear somebody saying “Oh Waka, I’m gonna compare you x, y, z.” That’s kinds of disrespectful. It’s like somebody comparing me to fuckin Wayne or DMX. You can’t, that’s disrespectful. I can never be as good as them. It shouldn’t be competing.  So I feel blessed.

The Spectator: You have a couple of businesses, and you’re also a family man and you also rap. How do you balance all of that?

Waka Flocka: It’s hard. I don’t sleep a lot. You only get four to five hours of sleep a day. That’s the only way it works. I don’t got the luxury of sleeping all of the time. That is something that I wish I could do. I don’t got the luxury to cry. I don’t have the luxury to be depressed. I don’t have the luxury to say “I don’t wanna do it.” I don’t. And to me that’s a good luxury. I’d rather that than not knowing what the fuck to do. So to balance it all out, I think you don’t think about it. I think its gotta be genuine because I’m actually doing so much that I have to be genuine cause you feel it. That’s what it is.

The Spectator: Are you excited for tonight?

Waka Flocka: Fuck, yes. Of course. Like me now, I think I’m more excited to be rapping than the last two years now than ever. Like I feel good. Now I’m not rapping like I’m not blinded. I used to be with a blindfold. Every time I heard a noise, I use to just run it. And now I don’t have a blindfold on. Its like its weird. Its like oh shit I’m not making all the money now. So before, I use to just rap and be like “ah my shit will be lit” and “Oh something good happened”. Now, I know its gonna happen. So its kinda like boring. Its like playing a video game and you know all the cheat codes. It ain’t fun no more. You know what I’m saying? Like I know how to press the buttons to get infinity lines and infinity ammo. Its not fun, but its fun as fuck cause I’m winning. So its like its weird. So right now, I’m just blessed, bruh. I’m blessed.

The Spectator: So you said its kinda like boring. Is there a way you break out of that?

Waka Flocka: When I say boring I mean not music is boring. I mean myself to challenge myself is boring.

The Spectator: Is there a way to challenge yourself?

Waka Flocka: Yeah its gotta be some new shit. I don’t even shave my face. I ain’t get my hair done in like fuckin’ five months.

The Spectator: So do you enjoy playing and performing for colleges more than other kind of places? Or how is it different?

Waka Flocka: Man colleges is fun because you’re in an environment of people who want to have fun because they working hard as fuck. Vice versa of going to club or not going to certain clubs. I don’t know it’s different. College kids party. They party. They not worrying about what they got on, what they look like, or what they drinking. It’s not about that. Its back to like the house party mode. So to me, college parties remind me of house parties. That’s why I like doing the shows because it’s like a house party. So if I want a house party vibe I just do college shows. If I want like an extravaganza, take pictures and look good vibe, fuck it I’ll do festivals. If I want be with celebrities and look even cooler and richer like Waka Flocka should look then I’ll go to the club. But what I prefer is the colleges. I used to like festivals too. EDM got turned into like pop music. That shits like not even like hard no more.

Waka Flocka: Yeah, its ugh. Got to many rules in it now. It use to have no rules.

Previous Kuhns is in for the long haul
Next UPD arrests bike thief, ends crime wave