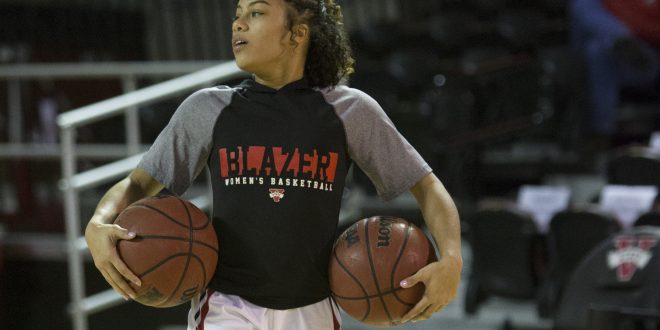 Kayla Bonilla is a freshman point guard for the VSU Lady Blazers.

Being a freshman starter for the conference champions might be intimidating for some but not Kayla Bonilla.

Bonilla is from Columbus, Georgia and has two brothers and a sister. She is a first-year student working towards a degree in biology to become a nurse anesthetist.

“Coach seemed like she genuinely cared about me as a person, and that shows a lot about the school and the coach,” Bonilla said.

While she also participated in track, volleyball and softball, basketball was the sport that she connected with the most, and she’s been playing since the seventh grade. Both of her parents played basketball, so it was easy for her to fall in love with the game.

“Basketball was my better sport,” Bonilla said. “I just loved it more, and it was more of a competition for me.”

Bonilla draws inspiration from off the court, too. Her favorite basketball player is Kyrie Irving because they share some similarities.

“He handles the ball well, and he is one of the smaller point guards in the NBA,” Bonilla said. “It’s easy to look up to him since I’m small.”

Coming in as a freshman starting athlete, Bonilla has faced many struggles as far as getting adjusted to college life. She also faced challenges on the court transitioning from high school basketball to college basketball.

“On the court, the game was a lot faster than what I was used to, so I had to adjust to that,” Bonilla said.

She plans to go far with her basketball career as she plans on becoming an All-American. She also has goals that she wants to accomplish with her team such as winning the conference and national tournament.

“We got a ring last year, so I know that we are capable of getting another one this year,” Bonilla said. “We also can go further into the tournament than we did last year.”

Just like any other athlete, Bonilla has a ritual before the game that helps her go on the court and do her best.

“I like to drink sweet tea and listen to music before every game,” Bonilla said.

Bonilla has already made it clear that she plans on continuing her basketball career at VSU. She believes that VSU can help her get to her goal of becoming All-American.

“I’m proud of her because she is a freshman stepping into big shoes and doing a good job at it,” Kenya Samone-Dixon, Bonilla’s teammate, said. “She is a good person on and off the court.”