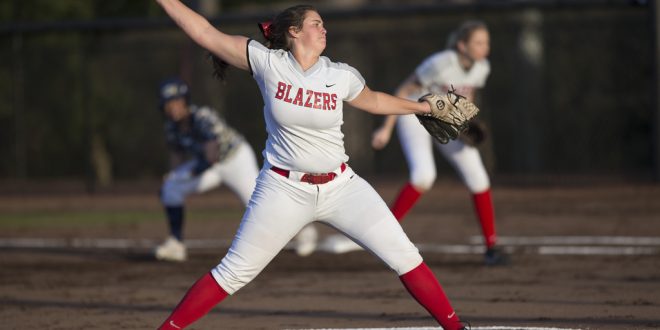 Kathryn Carter is 3-0 when she takes the mound for the Lady Blazers. The team is sitting at a 9-1 record overall and are blazing through their opening game.

Ten games in and the offensive juggernaut, VSU Softball, is on the move and mercilessly looking for new victims to leave in their destructive wake.

The softball team’s overall record is currently 9-1, and they are playing very well for the start of the season.

In softball, the game always starts the same. The umpire says, “Play ball.” Then the pitcher wheels and deal. Pitchers have to be the tone setters and the damage control when their number is called, and Valdosta’s arms have been setting the tone well and controlling damage.

The pitching staff walk and home run total could be a little lower. The team has walked 23 batters and given up eight home runs in 10 games.

The team’s earned run average is a 2.80 as of right now. It’s early, so I’d expect that to go up to somewhere around a 3.00 era. I think the team is good enough to keep their era where it’s at.

The hitting is still up to par with their usual play. The team batting average is .33, and it has tremendously helped them out late in games when they are down, and if the team doesn’t flip the switch on early.

At the Georgia Southwestern double header on Feb. 6, the scores were very close in both games.

In the first game, the Blazers didn’t score till the sixth inning. They tied it up at 3-3, and then won in extra innings off a homerun from Taylor Hartenbach.

With this team’s fabled bats, the team is never really out of a game, but I bet Coach Macera would love a couple runs on the board early and coming continuously.

Last but not least the team’s fielding has been exceptional. They have started out their first 10 games with 15 errors which certainly needs to be tightened up.

Those errors should just be the rust flaking off. A few hundred or so more ground balls a day at practice should straighten that out.

The defense just has to get their stuff together before Feb. 17 when they start conference games, and soon after, the Gulf South Conference seeding will start becoming a problem for teams.

The top eight teams at the end of the season will be put into a tournament to win the conference title. Through the conference tournament, the team would get a shot at the regional tournament. Teams that come through can win a national title.

The Blazers were knocked out in the semi-finals by the University of Alabama-Huntsville who lost to Mississippi College in the finals. I’m sure the team is itching for another shot for titles this season and will be ready when the tournament comes along.

The VSU bats still show up ready to crush, and their pitching seems to be improving from last year, especially in depth and later in the season we will have to see if they are improved statistically.

The softball team’s next game is a home double header against Flagler University today, Feb. 15, at 4 p.m.