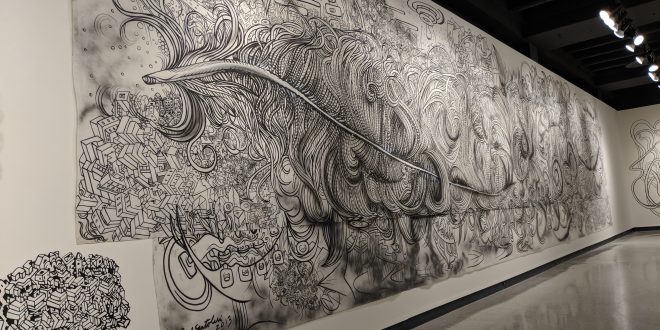 New in the gallery: Paul Santoleri

More of Santoleri's artwork, "Centered". Medium is ink and acrylic on polyethylene.

A panoramic view of Santoleri's work.

The second portion of a panoramic view of Santoleri's UNDERLINE at The Fine Arts Building gallery.

Paul Santoleri, an award-winning artist from Philadelphia, has transformed VSU’s Dedo Maranville Fine Arts Gallery into a full-gallery illustration titled “Underline.” “Underline” features mobiles hanging from the ceiling and art that has been spray painted on the floors and walls of the gallery.

Upon walking into the gallery, snow-flake like mobiles catch your eye immediately before the rest of the room captivates its viewers with intricate line work that descends from the ceilings to the floor. Patterns on the wall resemble giant waves, floral patterns and tangled up head-phone wires or shoelaces. Santoleri’s style shows intricate line work that at a glance may seem sporadic, but when you look at the room as a whole, “Underline” flows cohesively throughout the gallery.

On a biography provided by VSU’s Art and Design department, it reads, “Santoleri is known for these gallery/room sized art installations and has wall-sized paintings that are displayed on city streets around the world. Recently, Santoleri installed a permanent six by 30-foot stoneware tile mural at the Philadelphia International Airport.”

Santoleri states on his website that this work is a way to keep time and maintain awareness of his personal relationship to both the inner and outer world. Things Santoleri collects, visuals seen in his dreams and anything else that “slips out of his brush and through his line” can be seen in his creations.

Santoleri has conducted many social projects through his art, participating in residencies and collaborations through artistic communities and embassies worldwide. One of his most recent projects is with a group of students in Lagos, Nigeria. Santoleri has also done many collaborations with the city of Philadelphia’s Mural Arts Program.

Santoleri draws in response to his surface and surroundings, borrowing lines and images from his environments to create his works, according to his website. Santoleri says that drawing for him is about “rhythms, repetitions that build a narrative, the forms lately have spun into abstractions based on emotions, patterns, movement and direct response based on instinct.” Santoleri presents his work as “room drawings,” where the viewer experiences the art by walking through the room.

“Underline” takes a blank canvas (an empty room) and turns it into a work of art. Santoleri uses the entirety of his canvas, including the floor to create a captivating work of art that shows off his skills in line-work as well as utilizing his canvas to create an image.

“Underline” will be on display in the Dedo Maranville Fine Arts Gallery until March 2, 2018. The gallery hours are from 8:30 a.m. to 5:30 p.m. Monday through Thursday and 8:30 a.m. to 3 p.m. on Fridays. Students get in free. If you are interested in more information, contact Julie Bowland the gallery director at 229-33-5835 or jabowlan@valdosta.edu.

An unprecedented distruption: What campus closure could mean for students

In the wake of the coronavirus being spread to what has been deemed to be ...