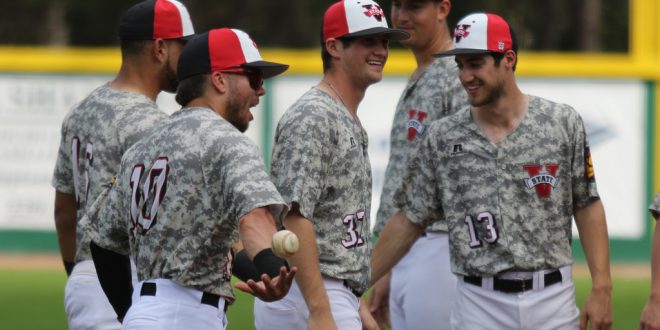 Blazer Baseball has their work cut out for them this weekend when they face the reigning conference champions Delta State.

Blazers gear up for Statesmen showdown

Delta State may be the powerful, well-coached, Gulf South Conference champs from last season, but they still couldn’t conquer the Blazers. VSU bested the Statesman, 2-1, on Delta State’s home field in 2017, and the two teams will meet again this weekend.

DSU is off to a hot start. They lost their first game of the season, but followed with an eight-game win streak, good for second place in the conference (before conference play).

Delta State is batting at a solid .317 with five players batting over .300.

It’s an old cliché, but you have to beat the best to be the best, and this is the Blazer’s job. Starting at 1 p.m. Saturday until the series is over on Sunday evening, they will have one of their toughest tests of the season.

Worst of all for the rest of the conference, DSU just about has all the same players from last year back.

“Delta will probably be the best team we play all year,” Head Coach Greg Guilliams said. “We are going to have to play well against them to have a chance.”

“Everything starts on the mound, and if we get good pitching we will have a chance,” Guilliams said. “We’ve got to be able to hold their offense down.”

The Blazers pitching has been throwing well. The team’s earned run average is at 3.03, and their opponent’s batting average has been held to .223, which is good sign for the Blazers staff.

The problem may come with the Blazers’ fielding. Their fielding percentage is right around the bottom of the conference at .957.

Again, it’s very early, so the team may fix its defensive issues. But during Sunday’s home game against Barry University, an error by right fielder B.J. White almost resulted in an inside-the-park grand slam, which could have cost them the game.

On another play in the same game, third baseman Elias Macias dropped the ball on a play at third base, which kept the inning alive for Barry.

“We just can’t have a lot of moments where we take off because good teams will make you pay for your mistakes,” Guilliams said. “Our margins for mistakes will be small.”

The Blazers batting average may be low right now at a .211, but it’s early in the season. The team can still remedy that. The team does have a good on-base percentage at .319.

“I think Delta is a good team,” Centerfielder Dalton Murray said. “But I don’t think they have anything that we can’t handle. As far as Delta is concerned, I just think it’s another game.”

Murray said it will come down to fundamental baseball.

“Somebody’s going to throw a ball and someone’s going to catch it,” Murray said. “We’ll just react as it comes. I don’t think it’s anything to prepare for. We’ve got to play our game, and the results will happen.”