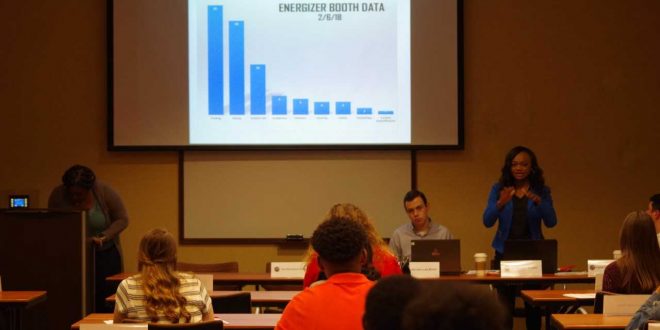 On Monday, Feb. 19, SGA began its meeting off with an inspirational message from Sen. Bob Greenbaum. Greenbaum opened the floor for discussion to the question: “What makes a good leader?” The floor sat silent, but Greenbaum came prepared with the answer.

“The art of influencing and directing people in a way that will win their obedience, confidence, respect and loyal cooperation in achieving a common objective or goal,” Greenbaum, who received this definition from his commander of ROTC, said.

His speech prompted the introduction of the END IT movement, an attempt to raise awareness for more than 27 million people trapped in the worldwide human trafficking network. SGA plans to adopt their idea of Freedom Fighters, which allows SGA and the student body to help fight human trafficking with a donation of $7.

According to the END IT movement website, “Slavery is illegal in every country, but is present in 87 percent of all nations.” This quote was stated during the meeting to the senate and gallery members for any objections to adopting the movement. All were in favor.

As the meeting progressed, SGA, reviewed ways to solve the campus bike issue. Bikes have come up missing or stolen throughout the academic year, but SGA presented a solution to solve it through a video known as “SPIN.”

Bikeshare programs in the US and on college campuses have mostly consisted of kiosks or stations, where users can unlock a bike, take it off the rack, use it and return it once their class is over.

With SPIN, the program will bring a kiosk-free bikeshare concept to anywhere that people need transportation.

“This would put an end to our bike crisis on campus,” President Maya Mapp said.

The video showed that the bikes will have license plates with a printed QR code. VSU students can scan the QR code into a SPIN mobile app to unlock any bike on campus and start the meter. So far, pricing is $1 for 30 minutes, but this is not yet set in stone.

Furthermore, the bikes are manufactured to not be tampered with. The program itself describes its service as sustainable, healthy and efficient. Mapp opened the floor to the senate for discussion.

The senate will wait until next week to agree on the program due to the lack of members in attendance that night.

The Tiered Parking Model that has been in the works for weeks now has feedback. Working with auxiliary services on editing the proposal, SGA moved towards sending out an email to all VSU students for their feedback on how they feel about it.

Results are expected to come in the next couple of weeks.