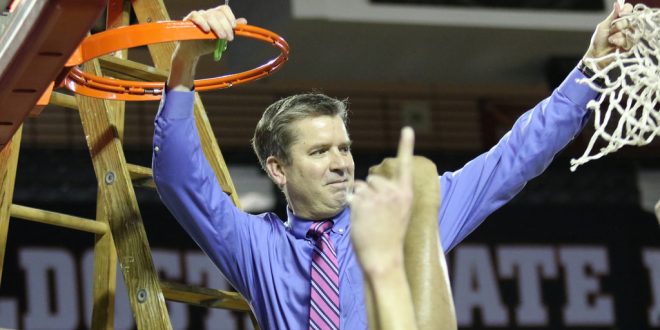 With one game left in the regular season for the Blazers, no time was wasted when it came to be declared the Gulf South Conference regular season champions for the second straight year.

Junior guard Beau Justice reflected on the feeling after realizing the achievement.

“It does not hit you until you’re cutting down the net and putting it in your ear” Justice said.

“Basketball has a hard climb trying to reach the championship, but the best climb is climbing that ladder,” Kodet, who was recently named the GSC Player of the Week, said.

The honor was solidified after the Blazers defeated North Alabama 98-75 in gritty fashion. The Blazers continue to sit atop the GSC rankings, holding the No. 1 seed and home-court advantage in the first game of the playoffs.

Their record cements them for the honor, but the statistics make the record a bit more valid. Offensively, the Blazers are No. 1 in the GSC for scoring, averaging about 94 points per game.

Within those scoring totals, the Blazers are No. 2 in three-point percentage, averaging about 40 percent on the season.

Although the Blazers hold the regular season crown, they must first close out the season against rival West Florida, who currently has a 24-3 record. West Florida is ranked No. 2 in the GSC standings.

In their first matchup on Dec. 2, the Blazers fell to the Argos 88-97 in Pensacola, Florida.

The second time around should be much different, as the Blazers have not lost a game at The Complex this season. Not only is the game big on the schedule, Kodet has begun his game plan for the Argos.

“The game plan is going to be to play how we have been playing and just go hard,” Kodet said. “When it gets to game time, we are going to have our sixth man, which is the big crowd.”

With zero loses at home this season, the Blazers do not want to lose this game, especially on senior night. Furthermore, the game will be aired on ESPN3 and the Watch ESPN app, so defeating the Argos is a must.

Statistically, the Blazers will not be moved from the top spot in the GSC with a loss because the Argos are two games back in conference play, losing three games to the Blazer’s one loss.

The contest will take place On Thursday, Feb. 22 at the Complex. ESPN will be broadcasting the matchup and tip-off is slated to begin at 8 p.m. following the Women’s at 6 p.m.