Home / Sports / Remember Why: Murray plays with purpose to serve 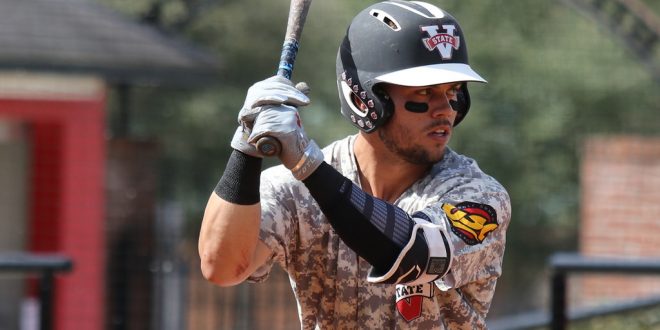 Dalton Murray has used his person devotions to motivate him on the field.

Remember Why: Murray plays with purpose to serve

VSU Blazer outfielder Dalton Murray has a pre-game ritual that he never misses. Before every game, he writes the words “Remember Why” somewhere on his body. It has a meaning that is truly important to him.

“I always write ‘Remember Why’ on my tape or anywhere I can write it,” Murray said. “For me, that means ‘remember why you play’ and that is to serve the Lord. Growing up it was very selfish behavior to want to do good for yourself during a game. Ultimately, those things don’t matter. I still struggle with that sometimes, but I try not to.

Two years ago, Murray came to VSU from Florida Gulf Coast University, and from the gate, Murray contributed to the Blazer attack.

His first year with the team in 2016, Murray hit .346 with 26 runs batted in (RBIs) and a .447 slugging percentage. Murray also had the least amount of strikeouts as a starter on the team, going down only 16 times on strikes.

In Murray’s second year at VSU, he crushed again, hitting .378 with 44 RBIs and finished the season with a .447 slugging percentage for the second year in a row.

In those two years, Murray’s batting average never fell under .300. The lowest Murray ever hit in his first two seasons was .305.

This season, Murray is starting out slow. He’s batting .206 with a .333 slugging percentage and has an on base percentage of .325. Everyone around him is very positive he will get his.

Before his college days, Murray moved from Ohio to Okeechobee, Florida and grew up wanting to play outside anyway he could.

“I always liked being active when I was a kid,” Murray said. “Anytime I can do something outside or play a sport I did it. I picked up baseball when I was young. I was probably about four years old.”

Murray grew up playing all sports, not just baseball.

“I played soccer, basketball, baseball and football a little bit in middle school, but I always had the passion for baseball,” Murray said. “I grew up collecting baseball cards and watching SportsCenter in the mornings. I just wanted to watch the baseball highlights.”

“I’ve always loved catching, and Molina is the best,” said Murray, who has been a catcher in the past, but is playing outfield this season. “I love the Cardinal tradition, the fans and the atmosphere. Unfortunately, I have never been to Missouri for a game, but I have liked the Cardinals for years now.”

Once sports got serious, Murray stuck to his passion and played baseball.

“I played all of those other sports until about high school,” Murray said. “I played basketball and baseball. Basketball was just to stay active until baseball rolled around.”

Murray went to a few colleges before he found his place at VSU.

“I played two years of junior college,” Murray said. “After my sophomore year, I got picked up by Florida Gulf Coast. I went there and a couple things didn’t go right as far as school and classes. I decided to move here after an old teammate from my junior college days. I thought it would have been a good move to come to VSU.”

Murray was highly recommended to Guilliams through an old teammate, Marcus Sigmon.

“Sigmon had talked to me about Dalton, and when Dalton transferred from FGCU, we had a pretty good idea of what type of player we got,” Guilliams said.

Guilliams was impressed from the beginning.

“With Dalton, he really does everything well,” he said. “He runs well, he’s got an A-plus arm, he can hit, he has got some power and he is an A-plus defender. He really has all the pieces of the puzzle that you really would want in a player. Then you add to that all of his intangibles. He has great leadership skills, is such a hard worker and he does well in school. He is really is low maintenance.”

Murray has taken his leadership role on and is doing well influencing his teammates to be the best they can be.

“Players that are good leaders are able to inspire and are able to make those around them better,” Guilliams said. “He is very unselfish. If you were in the dugout during the game, you would hear him encouraging his teammates. Off the field he does the right things, he isn’t perfect, but he really makes a conscience effort to do what is best for the team.”

Besides writing “Remember Why,” Murray likes to spend some alone time writing in his daily devotional before a game.

“We will come out on the field, take batting practice, infield and outfield, throw, stretch, then we have about 20 minutes of downtime,” Murray said. “I usually like to spend that time in a separate room with my devotional. I can pray before, so I can receive something throughout that day. Usually, I will write it down, and I’ll put it in my back pocket or I’ll post it somewhere.”

Since this season is Murray’s senior year, his family really makes an effort to go and see him play.

“My dad actually just retired, and my mom is a registered nurse,” Murray said. “She works at a hospital. The goal for them is to try and make every home game and stay through Sunday. It’s a four-hour drive for them. They have been to a lot of the games. It has been really nice having them see me play.”

Previous Justice duo make impact on Blazer Basketball
Next The Kinderlou Preview: What you need to know about before the Blazers tee it up in home tournament