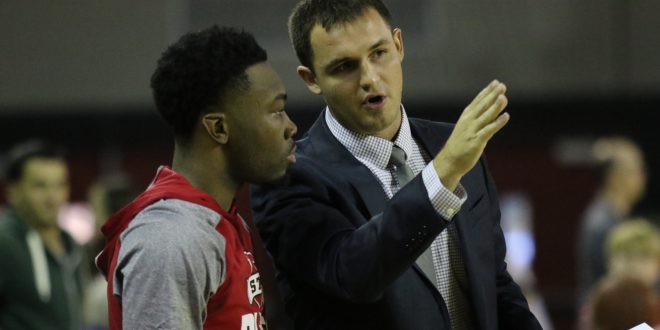 Blake Justice gives instructions to Winston Morgan prior to a conference game.

Being four years apart, Beau and Blake Justice never got a chance to play on the same team, but they got the next best thing when Blake decided to return to VSU to become the assistant coach for the Blazer’s basketball team.

The brothers are from Peebles, Ohio. Both are a part of the 1,000-point club for the Blazers, and Beau is looking to follow Blake’s lead, who went to Germany to play professionally. The Justice family is full of ballers. Their father, Brett Justice, played basketball for Capital University, and their younger sister, Jacey, is a standout at Peebles High School.

Blazers Head Coach, Mike Helfer, said he felt Blake would be a good coach because of his understanding of the game. Blake averaged 13.7 points per game in three seasons at VSU.

Helfer observed the mutual respect between Blake and Beau as a coach-player tandem, explaining that Blake is extra-hard on Beau to propel him as a player.

Blake Justice discussed how Helfer would always tell him that he would make a good coach and how they talked extensively about him eventually coming back to help with coaching.

“Had it not been Valdosta and had it not been a situation where I could come back and coach Beau, I probably would still be playing,” Blake said. “The job was too good to turn down.”

The elder Justice said coaching his brother is no different because they have always spent time in the gym, and just now, it is in a structured environment.

“Beau has come a long way,” Blake said. “He’s changed his home realm of his game.”

He went on to describe the way that Beau’s shooting ability takes over all the other things he can do such as defending and creating shots for his teammates.

Beau has been following his brother’s lead for years, and that won’t change anytime soon.

“His knowledge of the entire game is beyond his years,” Beau said.

Beau said he values his brother’s opinion because of how much he knows rather than if he was in the stands or coaching. He credited Blake for making him a better player.

“Last year when he went to Germany, he would stay up until 4 a.m. to watch us play and have a paragraph or two text message on things I should work on,” Beau said. “He’s what made me start working hard at basketball.”

This caused him to feel driven by Blake to become better on a daily basis. Beau admitted to it being some brother-brother competition with Blake’s basketball resume.

He revisited times of when Blake scored 47 points in his first high school game, his college success and playing professionally in Germany.

“A lot of times people say I copy him, but it’s not copying if we both share the same interests, he opens a lot of doors for me,” Beau said.

Beau is leading the Blazers in scoring with 20.3 points per game on 48 percent shooting. He is looking to lead them to a national championship, following a 26-4 record and a regular season Gulf South Conference championship. The Blazers will open up the NCAA National Tournament on Saturday, March 10 against Eckerd College.

Previous A mapped out life: Maya Mapp looks to a bright future
Next Remember Why: Murray plays with purpose to serve