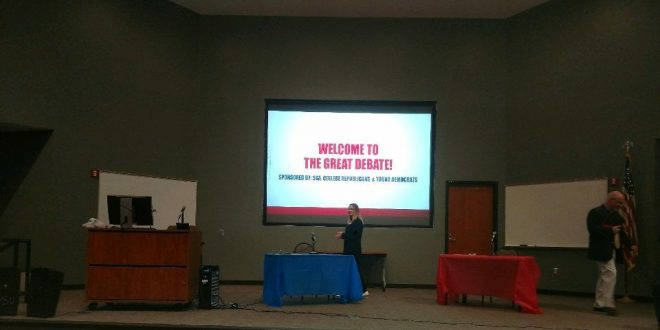 The College Republicans and Young Democrats at VSU hosted The Great Debate last Thursday on March 22 for students, faculty and the public.

“I’m excited to moderate and particularly honored to watch the students participate in an open debate.” Dr. LaPlant said.

Two student representatives of the Democratic and Republican Party prepared to debate and have open dialogue on various American political topics.

Freshman political science major and Director for the Young Democrats at VSU, Mara Bernstein, was prepared for her arguments.

“I am here to debunk the common misconceptions of the Democratic Party,” Bernstein said. “Democrats believe in American values.”

The other debater was sophomore political science major and Chairman for the College Republicans at VSU, Samuel Johnson.

“As the Republican Party, we believe in a limited government,” Johnson said in his opening statement. “We believe the money we work to make is our money and so on.”

“We should uphold treaties with other countries such as NATO,” Bernstein said. “We believe in basic human rights for everyone, and America should stand their ground.”

Johnson confirmed Bernstein’s comment, “Republicans agree. America is a leader, we should maintain our status in the U.N. and of course NATO is important.”

The debate went on to discuss free trade, tariffs and the economy.

But one question that struck the audience’s attention was, “With mass shootings all too common in our nation, what can be done in terms of public policy to address gun violence?”

“Gun violence is pressing in our society,” Bernstein said. “In order to rectify the situation, we should increase the age of owning a firearm from 18 to 21. There should also be comprehensive background checks and bans placed. If you cannot fly, you cannot own a gun. Although yes, we have the second amendment, and we should also look into laws that forbid felons from having guns and should look into banning guns in sensitive areas.”

Johnson commented back stating, “The republican party believes in the second amendment. My point is that current mass shootings are—for the most part—are happening in gun free zones such as schools and movie theaters. But in Kennesaw, Georgia, for example, they have a law. It’s not the most upheld law, but it is that every household has to have a gun. And in that city, they have one of the lowest crime rates in the state. The lowest in one of the most populated cities. I believe we should worry about who is not armed.”

Dr. LaPlant followed up stating, “Part of the solutions that have been offered is concealed carry, hardening our schools. Maybe the answer to gun violence is to actually have more guns. Part of the debates is also going towards the gun control reform—what do you find the most effective strategies to be?”

“More guns could solve the problem,” Johnson said. “Train teachers to be prepared for such situations. It is a safety precaution we could take.”

Next was immigration, talks of “the wall”, Congress complications, healthcare and polarization between political parties.

In the end, both parties and audience members felt good about the debate.

“I want to thank my fellow debaters and the VSU Young Democrats and College Republicans for putting this together, and I hope we continue this,” Johnson said.

Hannah Greene, a philosophy major, was pleasantly surprised with the debate.

“I came not knowing what to expect,” Greene said. “Were they going to be throwing things at each other or yelling? This debate was smooth and both seemed very open minded.”

To get more involved with politics on VSU’s campus, check out both party’s pages at: