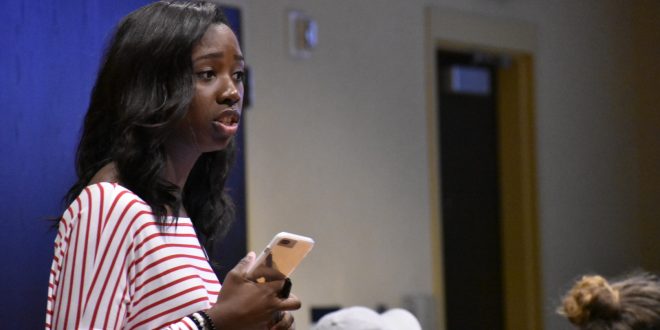 Get to know the SGA vice presidential candidate: Amea Thompson

Initially running for secretary, the public relations major and VSU sophomore, Amea Thompson, is now running to be the next SGA vice president.

“I wasn’t expecting to be running for vice president, but I’m really excited because this is something I’m really passionate about,” Thompson said. “I feel as if I’m prepared for it.”

Thompson is a current senator in SGA and has sat on the senate for the past two years. She plans to bring integrity and more student support to VSU under the vice president position. Thompson said she is listening to students’ concerns and problems, so she can better improve SGA.

“I want to not only be able to lead others but actually grow from this and learn more about being in a higher role of leadership,” Thompson said.

Thompson is running alongside SGA presidential candidate, Jacob Bell, under VSUnity. She said she is excited to run alongside of him because she is familiar with his style of work.

“I think integrity is something Jacob and I agree on being our core value,” Thompson said. “One thing my dad always used to tell me is ‘Amea, it’s one thing to always have your word and if you go back on that, then you won’t be able to be the best leader you can be.’”

Thompson said the biggest thing she is looking forward to this upcoming school year is making students’ experiences at VSU better.

“We have this big front lawn, and we only do events on it maybe every two weeks,” Thompson said. “I want to make sure everyone feels a part of something and get involved because my experience here at VSU has been amazing.”

Thompson said the changes people can expect to see, if she wins the vice president seat, is decreasing the monthly meetings and have the senate meet as a whole to discuss general issues and other situations.

“With my major being public relations, I would like to communicate more with the other public relation majors,” Thompson said. “I want to get more hands on with each of the senators to share thoughts and see how we can improve on things.”

“A change will come when a group of people come together and share their core values.”

* Thompson sat on the senate for two years and initially ran for secretary until the ticket changed.